Jose wants Ibra back to sort out his dressing room but Eric Bailly might not be around to greet him. Which is probably for the best... 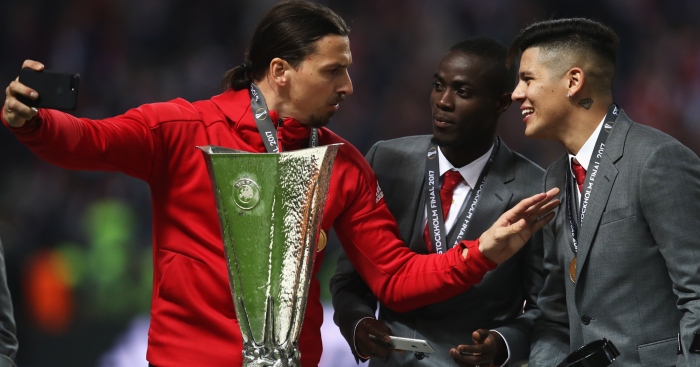 MOURINHO WANTS IBRA BACK?
According to ‘rumours doing the rounds in Manchester football circles’, Jose Mourinho wants to bring Zlatan Ibrahimovic back to United in January.

ESPN’s Mark Ogden has been spreading the gossip while suggesting that a return to Old Trafford for the star striker, who quit Old Trafford to join LA Galaxy in the spring, might not be a bad idea.

Mourinho doesn’t want Zlatan to play centre-back – Ed Woodward has another Swedish veteran in mind for that job. The manager doesn’t necessarily want Ibra to play at all.

Ibrahimovic’s influence in the dressing room is said to be the quality Mourinho most misses about the 36-year-old, with the ESPN story detailing how many of the squad looked up to Zlatan as the ‘cool older brother’. In his absence, cliques and divisions are said to have developed, and Mourinho wants Zlatan back to help sort them out.

BYE-BYE BAILLY
One player who might not be around for Zlatan’s second ‘welcome back’ bash is Eric Bailly.

The Ivorian defender has plummeted in Mourinho’s pecking order, with his early withdrawal against Newcastle suggesting he’s on borrowed time at Old Trafford.

Apparently, Tottenham are willing to give the 24-year-old a break. According to the Daily Express, Spurs could spluff £85million in January, with a large chunk of it going on Bailly.

The former Villarreal defender joined United in 2016 for around £30million and the Red Devils want their money back.

The 27-year-old only moved to China in earlier this year but 19 goals in 23 CSL appearances have caught the eye of some of Europe’s big-hitters.

According to L’Est Republican, Spurs have  ‘laid the groundwork’ for a deal for Bakambu in the ‘very near future’.

AND THE REST
Man Utd want to hold new contract talks with Juan Mata this month… United have also made a “dizzying offer” for Atletico Madrid and France defender Lucas Hernandez… PSG want to make Arsene Wenger their director of football… Napoli defender Elseid Hysaj was blocked from signing for Chelsea this summer… Liverpool and Juventus are monitoring Piotr Zielinski’s contract situation at Napoli… Barcelona have already begun the process of signing Ajax defender Matthijs de Ligt… Paco Alcacer will stay at Borussia Dortmund… Newcastle scouts watched Olympiakos’ Guinea midfielder Mady Camara last weekend… Arsenal and Man City are set to miss out on Cengiz Under, with the winger expected to sign a new contract at Roma.