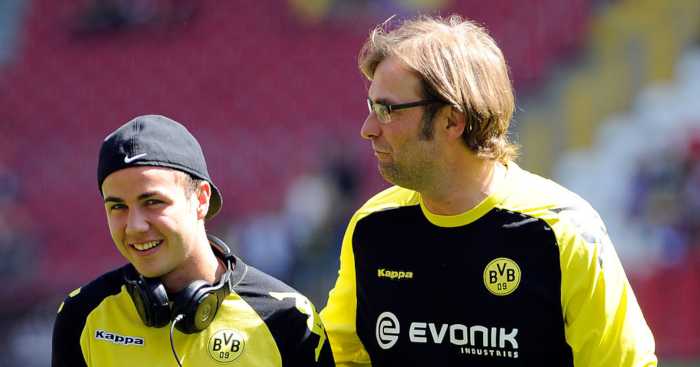 Mario Gotze has paid tribute to his former Borussia Dortmund manager Jurgen Klopp, the most “naturally funny” manager in football.

Gotze spent four years under Klopp at Dortmund, making his first-team debut for the club in November 2009 and leaving after the Champions League final defeat in May 2013.

The 26-year-old became one of the world’s best young talents with the guidance of the Liverpool manager but, save for scoring the winning goal in the 2014 World Cup final, has failed to reach similar heights.

Now back at Dortmund, the perennial Liverpool target fondly recalls his time with Klopp, who once gave him the number of his hair transplant doctor.

‘He was my first manager, and he was the one who believed in me and gave me the chance to debut at 17 years old,’ he wrote in his Players’ Tribune column.

‘It’s funny to see him now with Liverpool, because he’s such a natural guy in front of the media. He’s so authentic and he says whatever he wants. But I think most people just see the version of him standing on the touchline.

‘There’s a very serious side as well. When I was 17 or 18, and not giving 100% in training, he would be so intimidating. He used to come running over and get right up in my face and start shouting at me.

‘I can’t really translate from German perfectly, but you know how he talks, with his teeth grinding: “You have to have more passion! You have to give everything! F***! Come on!!!”

‘Then after training, he would be completely calm again, and he’d take you aside and say, “Mario, how are you? Let’s talk about life. What’s happening?”

‘He knew how to handle me. He was an outstanding coach, but his personality was the most important thing for me as a young player. I have never met a manager in football who was so naturally funny. I will never forget the time I ran into him in Dusseldorf during the summer. He was going to see the specialist there to have his hair transplant done.

‘This became big news in Germany, but he was so funny about it. He was smiling, telling me all about it – how cool it was going to look and everything.

‘And then as he was leaving, he just gave me a wink and he said, “Mario, don’t worry, I will save the phone number.”

‘Then he laughed and walked off. Most people would be embarrassed or not say anything, but he didn’t care at all.

‘He was such a funny and positive influence on everyone around him. I have to thank him, because he gave me my start, and we achieved some great things together at Dortmund in those years.’