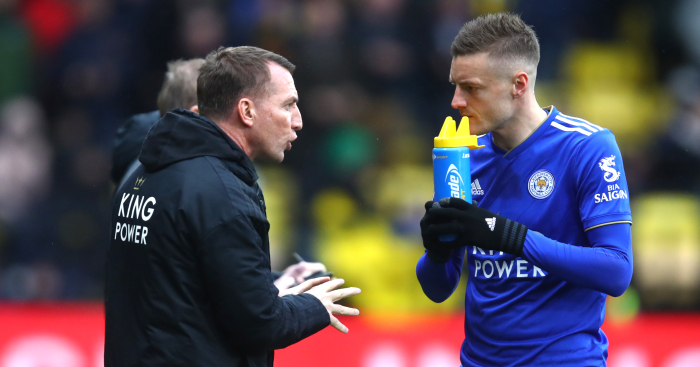 Graeme Souness and Rebekah Vardy is the fight that we all needed without ever knowing it.

Souness launched into a diatribe against what he perceives as ‘player power’ at Leicester ahead of Brendan Rodgers’ first game as manager.

The Foxes lost 2-1 to Watford on Sunday at Vicarage Road, but Souness made headlines before the game by criticising something that isn’t Paul Pogba.

“I think it’s obvious that they have an influence when things are not going well,” he told Sky Sports of players such as goalscorer Jamie Vardy, Wes Morgan and Kasper Schmeichel.

“They’re not slow to voice an opinion, whether it’s directly or through a family member or an agent, which I don’t like.”

And you know what happens to those who chat any amount of shit, be it soooo much or even just a nugget.

Souness, of course, is not the sort of man to let that faze him.

“You know, I don’t see that group being supportive of Puel and the last…maybe for the largest part of his time at that club,” he continued.

“I think there’s no doubt about it that those players have access to the highest member of that football club. I mean the owner.”

Asked what he would do, and whether he would “get them onside”, Souness told his best mate David Jones that “you have to”.

“And if you’ve got a few disappointed characters in the dressing room that feel they can undermine the manager when things are not going well, they will do it. They are weak.”

Put to him that suggestions of player power at the King Power are purely speculation, Souness doubled down.

“Well I look at the stories that come out of Leicester – and not recent stories, going back – I come back to…the reason I say that, and I say it with great confidence, is that that’s a team that won the league three years ago, and the following year they’re fighting relegation near enough. What does that say about that group of players? It means that none of them held the mirrors up and said, ‘Could I do more?’

“They were looking for someone to blame.”