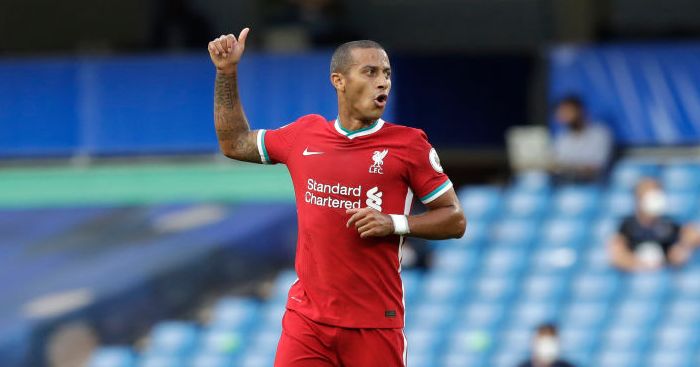 The absence of Jordan Henderson increases the chance of Jurgen Klopp handing a first start for new signing Thiago against Arsenal on Monday.

The 29-year-old replaced Henderson last weekend in their 2-0 victory over Chelsea at Stamford Bridge and set a record nobody knew existed.

And Souness thinks Thiago will find the Premier League “a breeze” after playing in other top leagues throughout his career.

“Zico was the best I played against, I don’t think I got within two yards of him in maybe eight times I played against him in the course of my career with Liverpool, Sampdoria and Scotland,” Souness said.

“He was one of those rare players that always seemed to have an extra yard of space to play in, the radar to see several moves ahead, the intelligence to be perfectly positioned when he received the ball and the perfect weight of touch to open the game out rather than taking it towards an opponent.

“I suspect that many current Premier League players may find Thiago Alacantara as difficult to deal with.

“I reckon Thiago should find British football a breeze because he’s that good, too. Whenever you buy a player as a manager, you’re always trying to eliminate risk. Thiago ticks all the boxes – tremendous work rate, vastly experienced, he’s a creator but doesn’t shy away from the hard yards either.

“Liverpool’s strongest XI picks itself other than their midfield. Klopp varies it more there than in his attack or defence and he needs a strong squad this season, but if he was playing in a European Cup final tomorrow I reckon he’d pick Fabinho, Thiago and one other as his midfield for it.

“You have to mention the money Liverpool have paid for Thiago. It’s an absolute bargain for four years from a truly world-class player.”

However, Souness has one doubt about fellow new signing Jota and his ability to play “in cup finals every week” for Liverpool.

In his Sunday Times column, Souness added: “Thiago will understand that you’re playing in cup finals every week because the opposition badly wants to beat you. He can deal with all that.

“That would be my only question mark against Diogo Jota, Liverpool’s other new signing. At Wolves, it wasn’t a cup final every week but it will be at Liverpool, so he has to show that he’s ready for that.

“Otherwise, he fits the bill to deputise anywhere in that front three. He’s got great technique and understanding of the game.”