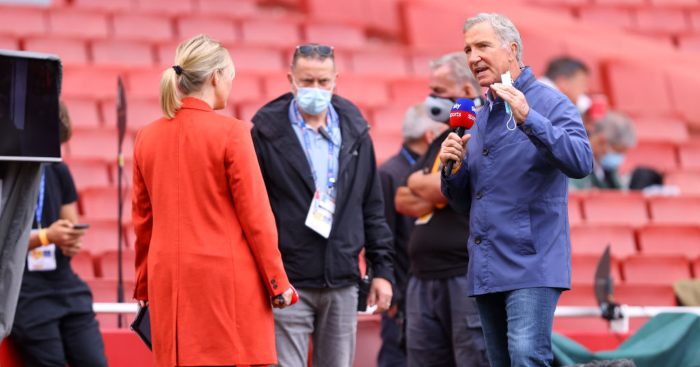 Graeme Souness and Jamie Carragher had a heated debate around Jordan Pickford’s reckless challenge on Virgil van Dijk with the Liverpool defender ruled out for several months with an ACL tear.

The incident sparked controversy in the Sky Sports studio with Souness branding Pickford’s challenge an “assault” while Carragher reminded the former Liverpool midfielder of his tough tackling.

Souness said: “It’s outrageous. It’s one that, for me as an ex-player, it’s, ‘Wow!’, and I’m not even thinking about offside. But how these people who make these decisions at Stockley Park can look at that and think, ‘That’s offside’, I just don’t get it. They just don’t know what they’re talking about, they don’t.

To which Carragher replied: “Listen, I reiterate what the lads are saying there and a big thing for me now is when we go into big games, we always demand the best referee and Michael Oliver is the best referee. I’m now actually wondering would you rather have the best referee at Stockley Park rather than on the pitch?

“Because these are decisions that are deciding games really. Of course – I’m going to say what everyone else has said – of course it should have been a red card for Jordan Pickford, it was a terrible tackle.

“But there will be a lot of frustration now in the Liverpool camp, from Liverpool supporters, maybe other people and neutrals wanting Jordan Pickford to be banned: ‘This is a terrible tackle, this is this, this is that!’

“We’ve got to be careful with that and I am going to defend Jordan Pickford on that. Yeah, it was a terrible tackle, I’ve had my leg broken, I nearly broke Nani’s leg… these thing happen unfortunately in football.

“I don’t think anyone goes out of their way to deliberately hurt someone. Hand on heart, I believe 99 per cent of professional footballers will not try and hurt someone. Jordan Pickford is all over the place with his game at the moment, comes out and makes a crazy decision as he has been doing for the last 12 months and very, very unfortunately one of the best players in the Premier League is obviously in a bad way.

“I hope and I really believe this will be the case, Jordan Pickford will not be in a good place tonight and I hope he isn’t in some ways. I always remember when I made that really poor challenge on Nani, fortunately nothing happened to him.

“We beat Manchester United that day but I went home that night and it was all I could think about. I didn’t want to be associated with someone who brought another footballer’s career to an end.

“It’s a really serious one and we all feel for Van Dijk but Pickford has made a poor decision and a poor challenge but I think that should certainly be the end of it. We’re talking about maybe retrospective, looking back on it, lynch mobs on the back of it… these things unfortunately happen in football.”

Souness responded: “But it’s the bigger picture we’re talking about. Referees are there to protect players.”

Carragher hit back: “Oh Graeme, the tackles you did!”

Souness continued: “What have I said that’s wrong? I’m saying they’re there to protect players. I’m agreeing with you that Jordan Pickford didn’t go out to injure Van Dijk but my point is that if a referee ‘s on the pitch and doesn’t see anything wrong with that, it then goes back to Stockley Park and they still don’t see anything.

“And this is after all the technology. But I come back to my first thing and I’m angry about it where a referee can look at that challenge from Jordan Pickford and all he wants to talk about it the offside. That becomes absolutely secondary.

“Anyone who understands football will tell you that was reckless. And I don’t want to stick it on Jordan Pickford because I think he’s come out, he’s just tried to make himself big and he’s launched himself at Virgil. I don’t think he meant to injure him badly.

“But if a referee can look at that whole thing, that ten second sequence and go, ‘It’s offside and that’s all I want to talk about’, that’s what I’m talking about, Jamie. That’s what the problem is. If that’s what the referee sees, that’s the problem.”

Carragher finished: “Listen, I think something going forward, and I think the official involved was David Coote, I’ve said from day one that people in VAR have a problem with the authority.

“Michael Oliver is the best referee in the Premier League, I’m going to come in and say he hasn’t seen something. Is there not something in the game where people talk about ex-professionals being involved… I’m not quite sure because it wouldn’t work. People would have allegiances to different teams and all that.

“They’ve got that experience, they probably can make bigger decisions than maybe the officials that are in the VAR at the moment because, more often than not, the best referees are going to be on the pitch.”