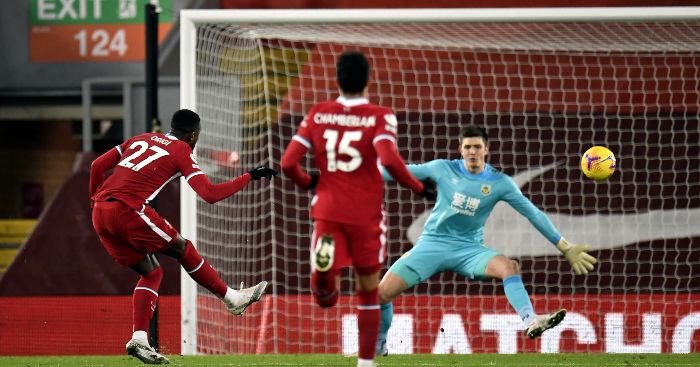 Graeme Souness predicted that Divock Origi would miss as the Liverpool striker had the Reds’ biggest chance of the match in their 1-0 defeat to Burnley.

Origi was handed a rare Premier League start against the Clarets as Jurgen Klopp decided to leave Mohamed Salah and Roberto Firmino on the bench on Thursday night.

The Belgium international found himself through on goal in the first half with only the keeper to beat but his shot cannoned back off the crossbar.

OPINION: Liverpool in danger of slip, sliding away as Anfield is breached

It was the best chance of the match for Liverpool, who found it hard to break Burnley down, before Ashley Barnes won and converted a penalty in the 83rd-minute.

That goal ended the Reds’ unbeaten home league run stretching back to April 2017 and Souness thinks anyone else would’ve scored Origi’s chance.

“Anyone but him really,” Souness said on Sky Sports. “I know he’s got some important goals for Liverpool but I said to you ‘he’s not going to score here’.

“I think the last one is most important, to gain the points we have done after a really tricky start and get back to winning games I am really pleased with that side of things,” he said.

“Physically we are always thought of of being strong and I think we were, we were strong in the way we held our team shape.

“We don’t work with the ball as much as other teams, particularly at these type of grounds, so you have to work well as a team without the ball.

“We do believe in the fact we can create and I think Barnesy was excellent the way he turned in the box – and it is a penalty.

“If we were due one it is a good place to get one.”