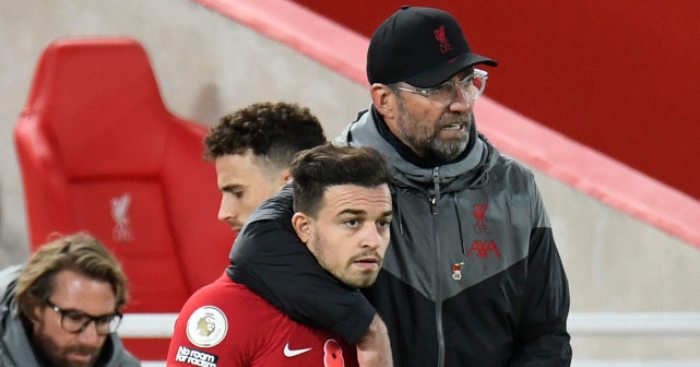 Graeme Souness has hailed Xherdan Shaqiri as a “door opener” for Liverpool following his stunning assist for their winning goal in a 2-1 victory over West Ham.

Liverpool had struggled to impose themselves on the game and find the winner before the double introduction of Diogo Jota and Xherdan Shaqiri.

Jota thought he had struck immediately, only for VAR to intervene, but he still made the difference as he settled the contest from a lovely Shaqiri pass.

“I want to mention Shaqiri,” Souness said. “He’s a door opener. He sees a pass and can deliver on it.

“I actually think he’s that cute that when the ball ends up with him, he’s actually gone for the nutmegs.

“I want to involve Shaqiri in this because that is a great bit of technique there.”

On Jota, who scored the winning goal, Souness added: “He’s a cute player, he’s rapid and he’s got an eye for a goal.

“The beauty of where Liverpool are right now, when you’re on top of the pile, you can bring players in and they don’t have to go straight into the team and be a major influence on day one.

“Man United are in that position where everyone who comes in has to be an influence. They can sit back, let the player have a good look at it and introduce them slowly.

“I would imagine, pretty quickly, he’ll be challenging Firmino for a starting spot. Why not? He’s got goals, a goal every three games near enough at Wolves and he’s in a better team now, so he’ll only improve now. I like him a lot. What is he, 23? He’ll only get better.”

Fellow pundit Jamie Carragher also hailed Jota, he said: “Yeah, of course. What I meant in terms of ‘raised eyebrows’ (when he signed) is the fee.

“It’s a good price tag for someone that you know when they come in, he’s probably supplementing the front three, rather than going straight into the team.

“I was always impressed with him when he was at Wolves, when I saw £45m – I thought it was a sizable fee.

“We never saw that last season, we never had that conversation before.”