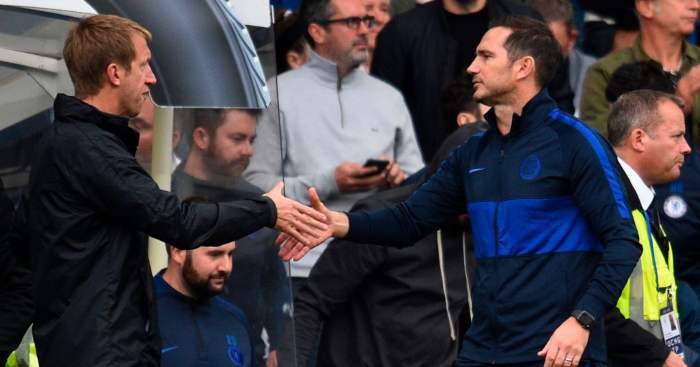 Brighton head coach Graham Potter continues to be impressed by Frank Lampard ahead of doing battle with him and Chelsea on New Year’s Day.

The pair faced off last season in the Championship when they were in charge of Swansea and Derby respectively and also earlier this campaign at Stamford Bridge.

Potter is yet to beat Lampard after Derby claimed four points last term while Chelsea edged out Brighton 2-0 in September and is full of admiration for the former England midfielder.

After replacing Maurizio Sarri in July, the Blues’ all-time record goalscorer has introduced a number of youngsters into the team, guided them up to fourth in the Premier League as well as into the Champions League round of 16 and all while under a transfer embargo last summer.

“He has done a really good job. I like him a lot. I was impressed at Derby and I’m impressed again at Chelsea,” Potter said.

“To manage the situation he has inherited in terms of the embargo and to deal with that in the positive way they have, with young players, and to be flexible in his approach in how to play and compete at the top end of the Premier League and go through in the Champions League, he has done really well.”

Brighton will not feel intimidated ahead of facing Chelsea having enjoyed a strong December with wins over Arsenal and Bournemouth.

Aaron Mooy played a key role in both victories, with the Australian firmly settled at the Amex Stadium after a season-long loan move from Huddersfield in August.

Potter refused to discuss his long-term future, but insisted he was merely content to know the 29-year-old is happy with the Seagulls.

“As I have said before he is a loan player, he is not our player,” the 44-year-old added. “He is Huddersfield’s player.

“We understand we have him for the full season so there is no stress and no pressure. The most important thing is Aaron is enjoying his football and we’re happy with him.

“He is improving and developing and that’s the most important thing and everything else is just talk and speculation.”

The Brighton boss is also unsure how busy the club will be in the winter transfer window, which opens on Wednesday.

Former Ostersunds manager Potter said: “As a collective we can improve in all the areas and we need to do that, but I’d rather focus on the guys we have here and help them improve because I don’t think they are at their maximum.

“I’m not sitting here thinking we have got the most out of this group of players so there is no desperate need to do anything.

“I really enjoy working with the players, I enjoy what we are trying to do and as I’ve indicated before we are not perfect and there is no guarantee with results, but I am happy with their daily approach and work and happy for it to continue.

“Again I’ve also said the responsibility of the football club in every window is to try and see if there is a way you can strengthen, but there is no news on that.”