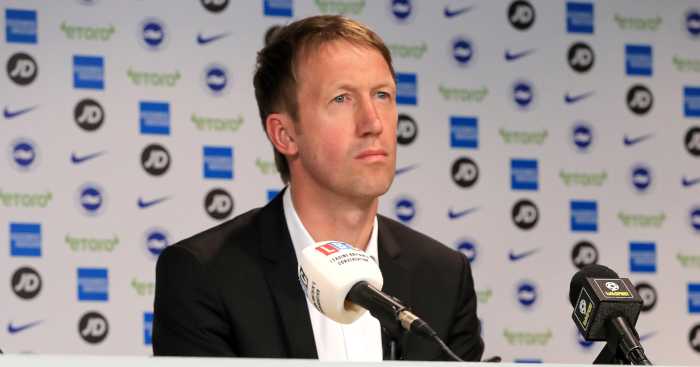 Brighton manager Graham Potter, whose father died last week, has said he can relate to some aspects of mental health, ahead of the season’s first ‘Heads Up weekend’.

Starting this weekend and lasting two weeks, every team from the Premier League, English Football League, National League, the women’s Super League, women’s Championship and the women’s National League will be dedicating their matches to Heads Up, a partnership between the FA and Heads Together.

When asked about the partnership, Potter said: “I think it’s an issue which is becoming more and more prevalent in society, everybody’s becoming more aware and the more we can speak about things and help each other, the better.

“I’m obviously proud that football can play a part in that.”

Potter had to deal with the death of his mother last year and he has opened up about how he has coped with the loss of his parents.

He said: “You’ve just got a job to do. I had to go clear my dad’s house yesterday, which has my mum’s stuff in as well and that’s not very pleasant – at a time when I suppose in an ideal world you’re trying to recover and recharge for the Premier League duties, but life is like that sometimes, you have to take those challenges.

“The job itself is one where you’re always under scrutiny, your decisions are scrutinised, you’re compared to somebody else all the time.

“I think that’s the challenge of mental health, often we feel that we’re not good enough, or we’re harsh on ourselves and I can certainly relate to that as a Premier League coach – but the more you talk about it the more it maybe helps other people.”

However, the Seagulls boss believes the constant pressures and challenges of being a manager in the top flight are part of the sport.