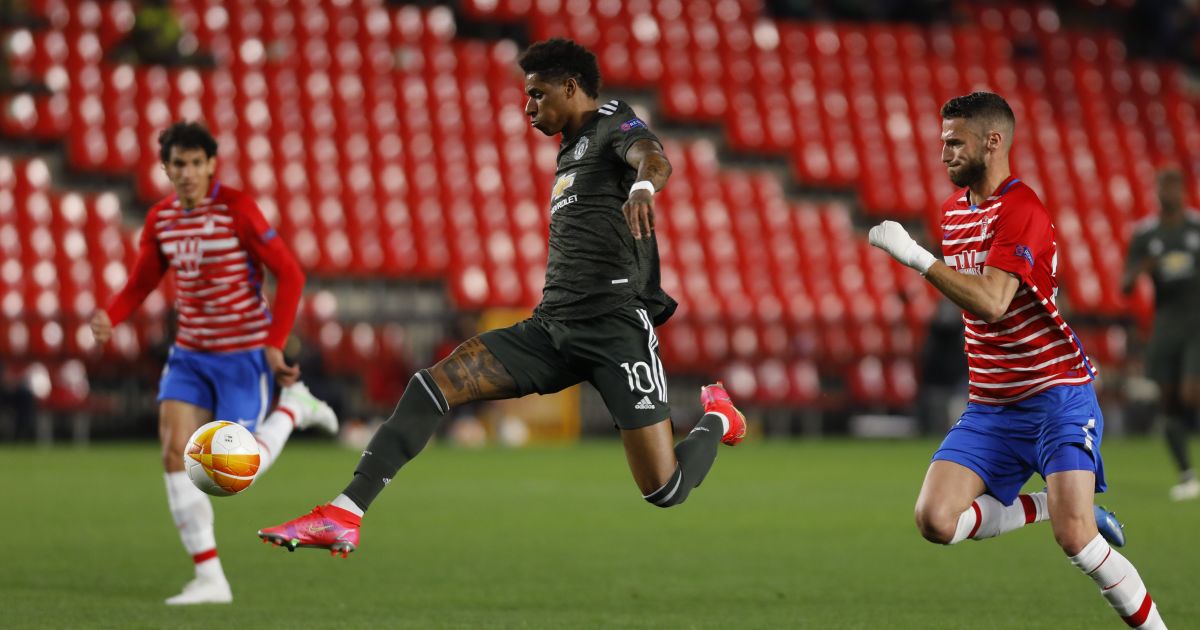 For Manchester United, that’ll do.

This was, in truth, a pretty rubbish game and United weren’t all that much better than a desperately tame and fearful Granada side who have doomed themselves to die wondering having fallen to a tie-killing 2-0 defeat without ever really laying a glove on a United side who managed only those two shots on target and appeared keen to do the necessary while expending as little physical effort as possible. Again: that’ll do.

Even the only slight negative on the night – three bookings that rule Harry Maguire, Scott McTominay and Luke Shaw out of next week’s second leg – are in their own way pretty welcome. With the tie effectively done, Ole Gunnar Solskjaer might have been tempted to rest at least two of those three anyway. Now the decision is made for him. Nice and easy, just like everything else for United here.

Their first goal was a very good one, it should be said. Victor Lindelof caught out Granada’s entire defence, the TV director and the BT Sport commentators with an early ball over the top that Marcus Rashford brought under his spell with the sort of class he normally reserves for forcing embarrassing government U-turns. A dozing defence were left with no chance to make up for their inattention, and Rashford’s neat finish gave keeper Rui Silva no hope of salvaging the situation.

That was less true of United’s second goal that came from a soft-as-shite penalty decision, albeit after a daft bit of daftness from Yan Brice that gave a clearly fussy referee A Decision To Make. It was unnecessary. Bruno Fernandes’ tumble was theatrical enough to have become a weekend-dominating talking point had it happened in a higher-profile game against more threatening opposition. Here, even Granada’s players could barely bring themselves to protest it.

If the award of the penalty was soft, Fernandes’ strike was softer still. It produced that rarest of things: a genuine goalkeeping error from a penalty. Rui Silva really should have saved it. As it is, the whole incident served as a neat microcosm of the game as a whole. Rashford’s first goal was too slick, too quick and too clinical to have any place in this generally sluggish and low-key affair. A soft penalty scuffed through the hands of a forlorn keeper was much more fitting.

None of this is to discredit what United did. Their plan was clear and sensible. They have Tottenham away in three days’ time and there was no desire to run the tanks down in this game. That Granada allowed the game to follow United’s obvious favoured path so thoroughly is harder to fathom.

But for United, it goes down as a thoroughly professional night’s work of the sort other English clubs have this season found so hard to come by in this competition. With Leicester beaten by Slavia Prague, and Arsenal leaving themselves plenty of work to do against the same opponents, and Spurs’ utter capitulation against Dinamo Zagreb, United need make no apology for seeing a palpably inferior opponent and deciding to take care of them in the least energy-consuming fashion.

And besides, not for the first time in the last 12 months, we still had something a bit special from Rashford to help us all get through it.