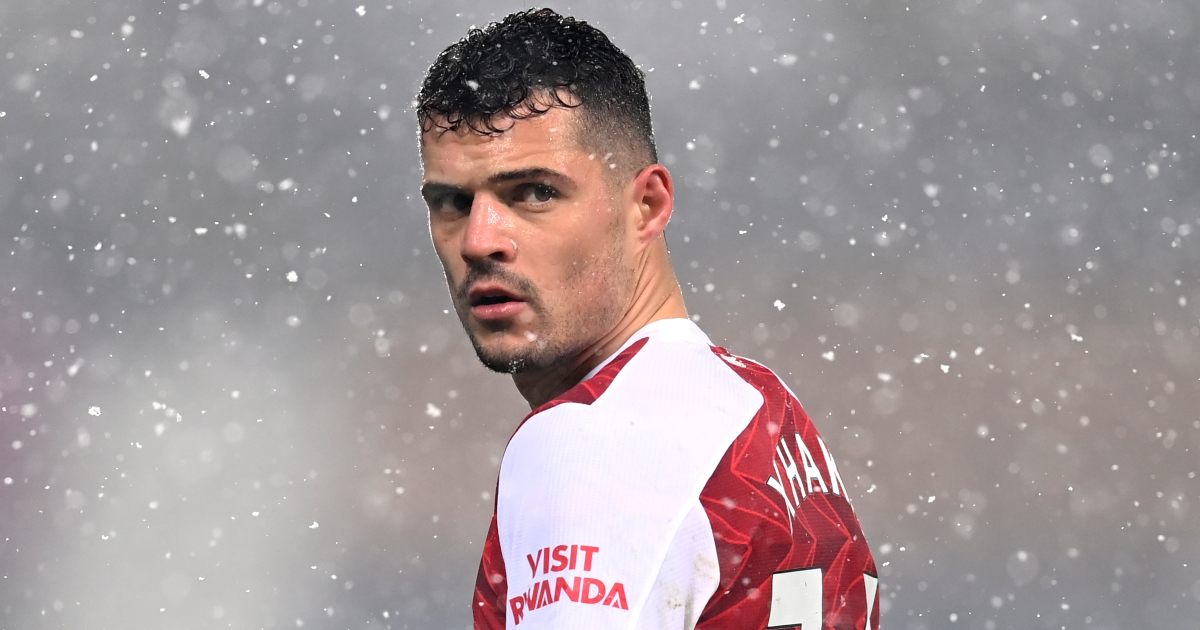 Granit Xhaka insists he is not afraid to play in front of Arsenal supporters despite his turbulent relationship with the club’s fanbase and recent social media abuse aimed at his family, which he claims will “kill football”.

The 28-year-old midfielder told fans to “f**k off” as they jeered him following his substitution during a draw with Crystal Palace last season.

Xhaka was stripped of the captaincy by then-head coach Unai Emery as a result and it appeared he had no future at the club.

MAILBOX: Joy at ‘gutless’ Arsenal ‘shows how the mighty have fallen’

That changed when Mikel Arteta was appointed in December 2019, although Xhaka has continued to split the opinion of supporters ever since he joined Arsenal five years ago.

The Switzerland international was sent off in a 1-0 loss to Burnley in December in what was one of only two games at the Emirates Stadium to have 2,000 spectators in attendance.

But Xhaka wants to welcome fans back, with the potential for a 10,000-strong crowd for Arsenal’s final Premier League game of the season at home to Brighton.

Asked if he has been happier playing in front of no crowds, Xhaka replied: “Not really, I’m not a guy who is scared or afraid to play in front of our fans – never, ever.

“I love the club and I respect the people around the team as well. I wish we could play with the fans because they would push us more and more and more.

“But the situation is what it is and hopefully things will change as quickly as possible to have the fans back and work together, to see we are improving and we want to take the next step as a club – this is what I wish.”

While playing in empty stadiums has prevented any potential verbal abuse aimed at Xhaka, he has not escaped the recent swathe of social media posts targeting footballers.

Xhaka received racist abuse from several accounts, including some which identified as Arsenal supporters and season-ticket holders.

He believes such abuse is damaging the sport and called for his wife and young child to be spared from any abuse.

“It is one of many (examples) if I am honest,” Xhaka replied when asked about the latest post.

“If I showed the others what they write, I think I have to close my social media, everyone has to close social media.

“I say that before and I will say that now and in the future as well, it is only about me. I am the guy who is on the pitch.

“But don’t make the other people involved because they have nothing to do with my job. Secondly, I have a lot of help from the club because this is something we have to speak very openly about.

“You don’t have to be quiet and say: ‘Yeah, I keep it with me’, because it is not always easy. But the club was here for me, for my family. They helped me, I was very open with the guys here and if you have people around you, who help you, it is very, very important.

“The problem is only if you lose, then it is a problem. It is not a problem when you win.

“ If you lose, everyone hates you, everyone is writing you things like…it is not possible to understand how they can write something like this you know.

“I wish I could meet the people who write me the things, to sit with them, eyes by eyes and to ask them, ‘why are you writing things like this?’

“This is not acceptable. So you have to open our eyes and to look after this a lot, because I think you kill the football like this if the people start to speak about a player or their families or things like this.”

When asked about those supposed Arsenal fans who had sent abusive messages, Xhaka was defiant in his response.

“But if one guy is a ticket holder at the club and speaks like this about his own players I don’t think he needs respect from our side or other people.”