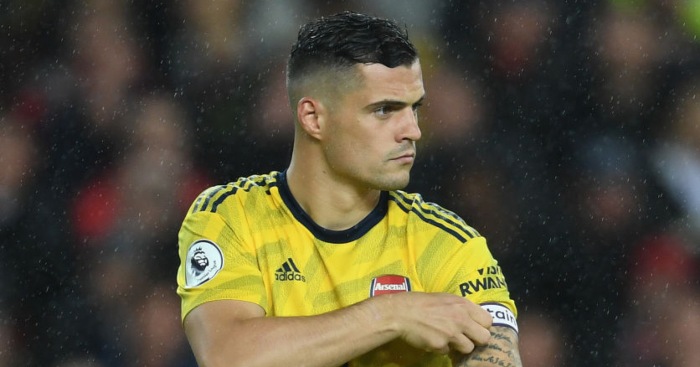 Had Scott McTominay not scored for Manchester United shortly before half-time in their game against Arsenal on Monday night, then the conversation about Granit Xhaka would be very different. It would still be mocking, but it would be about his cynical tug of Jesse Lingard’s shirt and not – and this is a specialism of the internet – centred around a rather confected accusation of cowardice.

He actually made the right decision. In the initial phase, it looked as though United’s counter-attack would break down, with Daniel James overhitting the pass for Marcus Rashford and sending him out towards the goal-line. Had Xhaka not hauled Lingard to the floor, then he would presumably have accelerated into a better position, been available for the easier pass, and – most likely – the goal would have been scored a few seconds earlier.

A yellow card to save a goal. That’s more than a fair trade and absolutely a captain’s intervention. But Xhaka doesn’t have that kind of credit in the bank, meaning the incident would have been described in a different way, becoming a comedy of his positional sense or a demonstration of his helpless cynicism.

Xhaka is an interesting midfielder, because he isn’t obviously good at anything. Superficially, at least, he doesn’t have any attributes which stand out enough to make his shortcomings bearable. He isn’t a great goalscorer, he’s not particularly stylish and he isn’t obviously creative. But he does have his uses. One of the reasons why Xhaka appeared on Arsenal’s recruiting radar in the first place was because of the extremely high Packing rating he acquired in the Bundesliga.

Packing is the analytical tool invented by former Bayer Leverkusen player Stefan Reinartz and is used to measure the worth of distribution. It’s a simple premise: the more opponents that are ‘taken out of the game’ by a pass, the higher that player’s Packing rating is. And Xhaka’s rating was very high, averaging 62 opponents removed per game during his last season at Borussia Mönchengladbach.

But while that describes his utility within the Arsenal midfield, it remains a subtle quality and, because the data isn’t immediately available to provide the necessary context, the value of his match-to-match contribution will always be elusive. That isn’t to say that Xhaka is in some way underrated or that each of his performances has a secret worth only accessible to super smart mathematicians. Clearly not. What it does mean, though, is that he’ll always be a player around whom there’ll be debate or, more likely, dissent.

Which really illustrates that it was a bizarre decision to make him captain. Or, at least, a decision which invites an unhelpful level of scrutiny and turns him from being just another under-performing player to one of the most antagonistic footballers in the country.

Of course, that’s instructed in part by the lingering emphasis British football places on captaincy. Elsewhere, it seems to be more of a ceremonial position and, while attitudes are beginning to change here, there’s still a set of imperatives which come with wearing the armband. The captain is still expected to have the broadest shoulders, to respond appropriately to pressure, and to be the greatest influence at the most difficult moments. Roy Keane in Turin; that’s what the ideal continues to be.

An example of that appeared on Monday night (16 Conclusions are here, by the way), in reaction to his failure to block McTominay’s goal-bound shot. True, the screenshots of the incident caught him in an embarrassing pose, in a position which invited the conclusion that he’d ducked out of the way, but that was just an opportunistic pile-on. Clearly the ball was travelling extremely quickly and clearly it also deflected off Sead Kolasinac before reaching him.

We’re very quick to accuse players of ‘bottling it’, particularly in that kind of situation. One of the lasting associations with Samir Nasri, for instance – even now – is of him waving a limp leg at that Robin van Persie free-kick in the Manchester derby. That kind of moment stays with a player. While Monday night wasn’t nearly that egregious, it acquired this undeserving significance because Xhaka was the Arsenal captain.

It’s that picture. The one which shows him crouched in front of the ball with his arms behind the back, about as far from the heroic, John Terry-style stock image as it’s possible to get. We like captains to block shots as if they’re smothering a grenade, not tense up and squint like they’re about to be gunged on Pat Sharpe’s Funhouse.

But this is Xhaka’s world now. With the permanent captaincy comes this list of dated expectations and a demand for optics which he just isn’t equipped to provide. He’s a mediocre player, that much has been proven, but the armband only serves to highlight that mediocrity. No obscure German statistics can save him now.