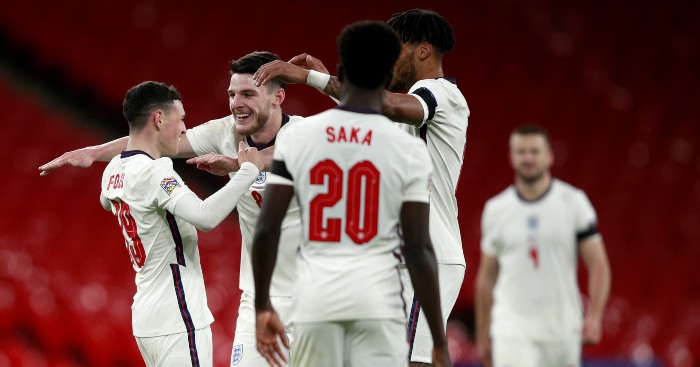 As ever, this represents our estimation of Gareth Southgate’s England thoughts. And we still feel like we know him well. Numbers in brackets pertain to this ladder from October…

No England goals in the whole of 2020 and yet still nobody can touch him at the top of this ladder. Or is it the bottom of the ladder? Now that’s a question. Anyway, 24 shots in six Nations League games and not one hit the back of the net. He must be cursing the fact that the man directly below (above? We have to stop this now) him on this list took the penalty that beat Iceland back in the beginning of time/September.

He left England’s Nations League hopes in a decent though underwhelming position after September, missed the next four England games and had to watch as they floundered and flopped their way out of the competition. The fact that he played just two games and is still way, way, way ahead of any of his teammates in the dribble count for the Nations League tells you everything about what they miss in his absence.

Since that Denmark clusterf***, he has conceded just five goals in eight games for club and country. Against Iceland, he was magnificent as basically a left-winger. If he is fit, he starts. Deal with it.

Poor in that first half against Belgium and injured thereafter, but he has basically been in the squad for seven years so surely only fitness issues can keep him away from Euro 2020.

‘Southgate appears determined to use him in the front three when a more ambitious option might be to drop him back into the midfield and pick one of the many other exciting attacking options Southgate is currently studiously ignoring,’ we said last month. Et voila. We have so much influence. He is more Frank Lampard than Jack Grealish but that is absolutely fine.

The only outfield player to start every single Nations League game. England has a dearth of deep-lying central midfielders so Rice gets a place by default.

Probably still starts ahead of Jack Grealish regardless of his absence from much of this Nations League campaign but we remember how anonymous he was against Denmark. A shoo-in for the squad but needs to be a) available and b) better in March.

Let in two goals against Belgium but neither were really his fault. Clearly would not be England’s No. 1 if Dean Henderson were playing football outside of domestic cup competitions. Carlo Ancelotti could soon make life really very difficult for our Gareth.

In a sea of potential right wing-backs he is floating to the surface. Thankfully the ‘Trippier at left wing-back’ experiment seems to be over but ‘Trippier at right wing-back’ remains very much a thing; he has started every Nations League game for which he has been available. And he has created more chances (12) than anybody else by some distance. Which is particularly damning.

How is the game going, lads? Kieran Trippier has just smacked the ball into Tyrone Mings’ face from a potentially dangerous free-kick

How many times will his international career be declared over before he bounces up and makes himself completely integral to the system, largely because he is our only ‘centre-half’ with any recovery pace at all? And that is vital if we insist on playing Maguire and this fella…

So, so awful against Belgium and yet…you absolutely know there is no shifting him from that England squad.

Four caps, four clean sheets. What more can he do (apart from not be sh*t for Burnley)?

“Jack has really impressed us with his approach. Since he came in he’s been curious about what we are looking for from him and he has taken it into training and tonight he has taken his club form into a game against one of the top international teams in the world,” said Southgate after that performance against Belgium. Shame he is still unlikely to start unless the boss changes his formation (which he won’t).

Great way to end the year 😍 thanks for voting me man of the match but I’m sure Phil should of got it 🤔🤣 great night! ❤️ pic.twitter.com/faJ9mrbGBW

He’s high but you know what? He’s brilliant.

Denied the chance to add to his three England caps by that ruddy coronavirus but for as long as England play this 3-4-3, one of its greatest exponents is likely to be in the England squad.

Started against Belgium in the absence of Maguire, making him England’s fifth-choice option. Do we need any more? Surely even the conservative Southgate will decide that finding space for Foden or Grealish is a better use of a major tournament squad place than a sixth centre-half? He won’t, will he? Have we f***ed this?

Poor against Ireland, making us slightly regret our giddiness of last month. But we do remember that he produced more in 90 minutes (potty mouth aside) than Trent Alexander-Arnold in his whole England career.

By our reckoning, there are only two striker places in this England squad (Rashford and Sterling can both play there if needed) and Calvert-Lewin’s two goals in five appearances make him the current holder of the only position realistically available to anybody not called Harry Kane.

A lack of Premier League football should be rocking his Euro 2020 hopes. But a lack of competition means that he featured in all three England games in this international break. And he emerged with two assists, which in England terms makes him The King of All Things.

⚪️ Tottenham Hotspur midfielder Harry Winks now has as many assists in his last three appearances for England than he has in his whole Premier League career:

Needs a move if he wants to move up (down) this list.

Hmmmm. Not started any of England’s last four competitive games; even a goal against Ireland did not earn him a start ahead of Mount v Belgium. He’s also yet to score in the Bundesliga this season as a million Manchester United fans will quite happily tell you.

Specialises in playing the left wing-back role for teams lacking in creativity. Everybody has to have a thing. And he was excellent against Iceland, involved either explicitly or in the background of most of England’s best moves, providing the cross for Mount’s goal and the five-a-side wall that let Sancho create Foden’s first. And England are yet to concede with him on the pitch.

Bukayo Saka has tested positive for being the best young player in the Premier League this season.

Southgate has avoided this decision by having 17 right-backs in every 35-man squad but the truth is that Alexander-Arnold is not a right wing-back and there are simply better options if England play that formation. Did not create a single chance in over 180 minutes of this failed Nations League campaign.

The suspicion is that injury will keep him out of Euro 2020 but we will keep him here because it would seem cruel to bomb him all the way out. Get well soon, fella.

England’s Under-21 goalkeeper is probably the next in line for a call-up. And there is literally nothing else interesting to say.

This really was not the time to get injured. Leeds being at the wrong end of the table will not help his cause either.

Only starts friendlies these days, but that injury to Gomez keeps him in the picture, even if it’s right on the periphery with half his head hidden underneath the frame.

Has been in all of the squads this season and his versatility makes him a handy man to have around. But no Premier League starts since September weighs heavily against him.

Has been in all of the squads this season; he is the closest England can muster to a Henderson clone. And he takes a fine free-kick…

James Ward-Prowse is the best free-kick taker in the league.

We wrote last month: ‘Can go no higher for now, but comes with a confident yet utterly worthless prediction that he will do next time.’ Utterly worthless.

Slip, sliding way. Not been further than a Premier League bench since the opening day of the season and that is unlikely to change any time soon.

Southgate likes him. His body does not.

His time will come. But for now, he seemingly has some growing-up to do.

A massive lack of central midfielders plays right into the kid’s hands.

There’s simply no way through at the moment for the spider legs.

Played 41 minutes of football over this international break so is still technically in the fold.