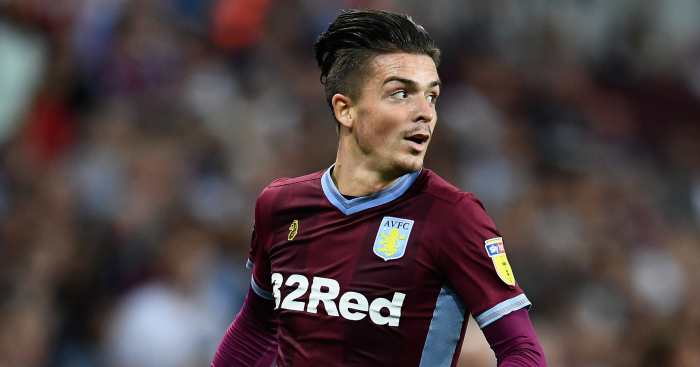 Jack Grealish admits that there was “disappointment” over his failed move to Tottenham this summer.

Grealish was linked with Tottenham throughout the summer, but eventually stayed at Aston Villa as Spurs oversaw a transfer-less window.

The 23-year-old has started every Villa game in the Championship this season, assisting just one goal in the opener against Hull.

It was that match, where he was substituted with seven minutes to play, that he thought would be his last for the club ahead of a return to the Premier League.

Tottenham lodged a £25m bid that they refused to increase by the £7m necessary to sign Grealish, while Liverpool dismissed ‘baffling’ speculation linking them with the player.

It looked as though Villa might be forced to sell to pay off debts, but the arrival of their new owners removed any need to cash in on their biggest asset.

Grealish has since signed a new long-term deal at Villa Park, and sees the collapsed Tottenham move as both good and bad.

“At Hull, I was 95 per cent sure it was going to be my last game,” he told the Daily Telegraph. “I waved to the fans when I got taken off as I thought I was going.

“Even on the Thursday morning of the transfer window, I thought I was leaving.

“Before the new owners, Villa needed the money so I kind of accepted that me going would save the club. I think the fans would have taken that, too, because we needed the money.

“Of course, it was unsettling, it was all summer. A lot of people saw the interview with the manager in Portugal when he said the club would have to sell me.

“At that time it could have got done, but for whatever reason it didn’t. They weren’t willing to pay what Villa wanted at the time. But the new owners came in and they changed everything.

“It’s not like I was devastated it didn’t happen, though, because I’ve still got to realise how lucky I am to be playing for my boyhood club. I’ve played over 100 games for Villa and I’ve only just turned 23.

“Of course, there’s going to be disappointment there. You’ve just got to look at what Spurs have done this season. They’ve beaten Manchester United 3-0 at Old Trafford, they’re playing Barcelona in the Champions League next week.

“I felt that if I’d gone there I could have maybe been in the England squad by the end of the year. I would never have gone there just to make up the numbers.

“I would have been a squad player, obviously, because you have to look at how good their players are. But I genuinely thought that after a month or two of training, I could have really made an impact.

“At the start of the season my head was swivelled, it was all over the place. Even after the transfer window closed, until the end of August, I wasn’t right.”