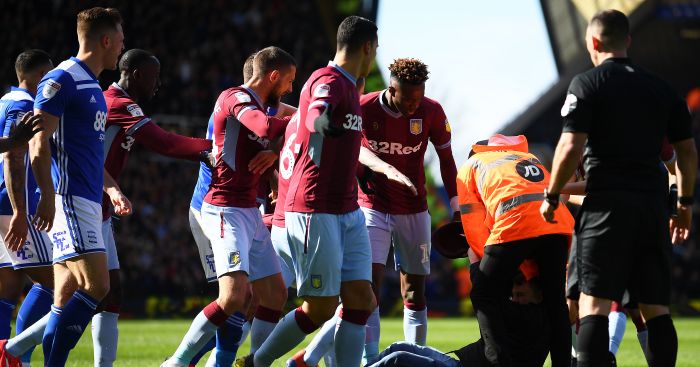 Aston Villa midfielder Jack Grealish was attacked by a spectator early in his side’s derby clash at Birmingham.

The incident occurred less than 10 minutes into the game when Grealish was in the Birmingham penalty area and a spectator in a flat cap ran on to the field and threw a punch from behind the visiting captain, striking him on the side of the head.

The intruder was quickly restrained by stewards as several other Villa players rushed in to confront him. He was led away by police, blowing kisses to the crowd as he left.

Former England defender turned Sky pundit Gary Neville called for Blues to be docked points over the attack on Grealish.

Neville tweeted: “The club are going have to take a huge punishment for this to act as a deterrent in the future . A Points deduction or Empty stadium for 10 games !”

West Midlands Police announced an arrest had been made following the incident.

A post on the force’s official Twitter feed read: “ARREST: Following the incident on the pitch involving an attack on an Aston Villa player; a man has been arrested and en route to a custody block. Further details to follow.”

The incident followed a feisty opening to the game, in which Birmingham’s Maikel Kieftenbeld was booked for scything down Grealish, while there were also clashes between fans outside the stadium before kick-off.

Police had to hold back fans while at least one man was seen being treated by paramedics after suffering a head wound.

Half-time arrived with no score and no further serious incidents, though Blues striker Lukas Jutkiewicz twice clashed heads with opposing players and was also booked for a high foot when challenging Villa keeper Jed Steer.

Press Association Sport understands the Football Association will await referee Tim Robinson’s official report before deciding what action to take, though incidents involving spectators come under the jurisdiction of the local police.

What a disgrace! We've never seen anything like this! 😮

A Birmingham 'fan' has run onto the pitch and punched Jack Grealish in the back of the head! 🤬 pic.twitter.com/2x50XGrRqD