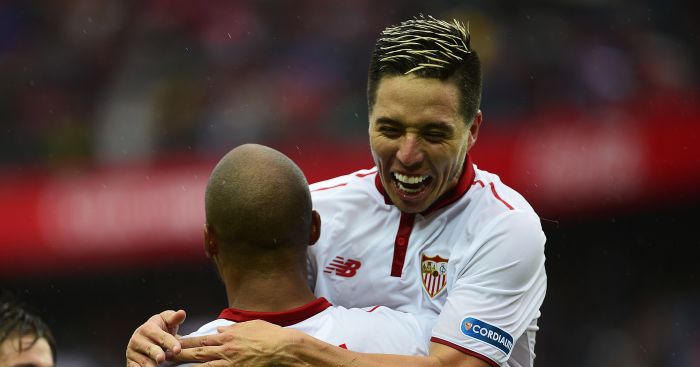 Samir Nasri says the “great food and beautiful girls” in Sevilla made the decision to join the Spanish side from Manchester City a lot easier.

The 29-year-old moved on a season-long loan deal in the summer and has scored three goals and created three more for his team-mates this season.

And Nasri has revealed the reasoning behind him seeking a fresh start in Spain.

“Guardiola wanted me to stay, but when your head needs a change, after five years in Manchester – where I had lots of injuries last season – I wanted to start something new and fresh,” Nasri told the Spanish media .

“When I spoke to Monchi and Rami, it seemed it was ideal. I also asked Jesus Navas, David Silva and Nolito how the club and the city was.

“Everything was good! It has great food and beautiful girls.”

Jorge Sampaoli has been successful with the Chilean national team and his assistant at Sevilla Juanma Lillo was recommended by Guardiola.

“The coach [Sampaoli] came with a great challenge, like what he achieved at the Copa America [in 2015] with Chile.

“I spoke with Guardiola and he told me what a great trainer Juanma Lillo was. This was all I needed to know. It was perfect for me.”