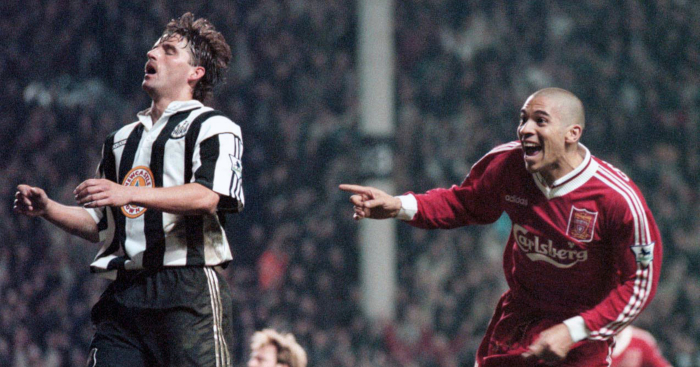 The pair both feel Manchester City’s remarkable 3-2 win over QPR in the final game of the 2011/12 season, a result that secured Roberto Mancini’s men the title, is the best ever in the Premier League.

Shearer and Wright also concur that Liverpool’s 4-3 win over Newcastle at Anfield in 1996, which left Kevin Keegan slumped over the advertising hoardings, ranks second.

“Newcastle had that 12-point lead earlier in the season in January over Man United, and Man United were chipping away at it,” Shearer told the BBC’s Match of the Day podcast.

“It just had everything, that game. Kevin was never ever going to change the way he wanted his team to play football. It was all-out attack. If you’re going to score three then we’re going to try and score four.

“Once I got into Newcastle then I could understand his philosophy and the way he wanted his team to play football – to go out and entertain the fans.”

Wright added: “It was just such an entertaining game. For a neutral it was the ideal game to watch.

“The thing with Liverpool and Liverpool fans is that they never give up on their team, ever. Doesn’t matter what’s going on. You’re always going to be up against it when you’re at Anfield.

“You genuinely felt for Keegan. I felt for him. It’s an iconic moment in the Premier League. That in itself made you feel like it’s over.”

On title-clinching City’s victory over QPR in 2012, Wright said: “That moment from Aguero. That’s why it has to be No. 1, for sheer entertainment and excitement.

“It would have been a choke. People would have ridiculed Manchester City if they didn’t finish that off.

“When you look at the build-up of it, Aguero kind of got that ball in the area then with the outside of his right foot he moved it into the area and went in. Balotelli was falling over.

“It was one of those situations you were thinking, ‘Oh my god, has that just happened?’.

“I’m not sure that as long as we’re going to be watching the Premier League when it finally does get going again, if we’re ever gonna get that kind of ending. How are you going to better that ending?

“That’s one of the best ever. Obviously we know ’89 [when Arsenal beat Liverpool to the title by making it 2-0 in stoppage time at Anfield] but that wasn’t in the Premier League.

“For the ending to happen like it did, two goals in the last minute of the season, with a team thinking they’d won it at Sunderland, is unbelievable.”