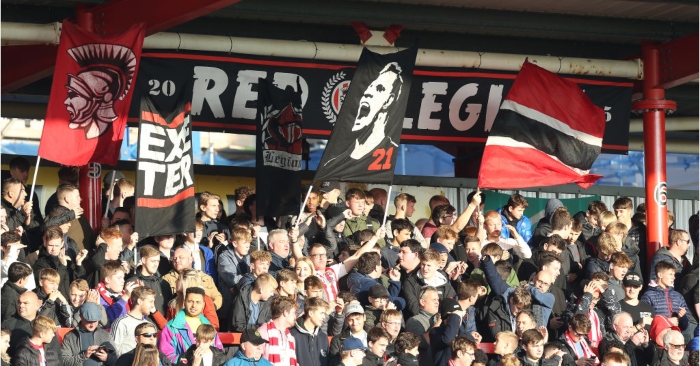 Back in 1992, the fan-ownership movement began in England with the creation of the first supporters’ trust at Northampton Town. The fans of the shoe town team simply wanted fans to be partners in the running of clubs and to get rid of the scumbags.

In that same year, the Premier League – the Frankenstein’s monster creation of the Football Association cranked into life – cash was crowned king, a mania for overseas ownership took hold and the rest is history.

Bury FC top the long list of crisis clubs that have suffered due to the stomping of fan ownership by free market football in the interim but Exeter City, top of League Two and run by its supporters, are quietly showing English football the way forward.

Exeter went fan-owned on the back of one of the regular cash crises that envelop clubs in the Football League. Debts hit £3.2 million at Exeter in 2003 and their ex-Chairman John Russell was later jailed for 21 months for fraudulent trading, a dirty example of the characters that were and continue to be attracted to football clubs.

Exeter City Supporters’ Trust, enthused by the fans’ work at Northampton Town, found there were literally no better people to run the club than its local community. Supporters and businesses raised £42,000 to see the club through its first month in the fans’ hands and by 2005, the Devon club were declared debt-free.

Exeter continue to run on zero debt while the EFL game around them operates deep into the red. Their greatest assists have always been the trust members, currently at 3500 in number and providing the club with volunteer services valued at £250,000 each year, ranging from decorating the stadium to pro-bono legal advice.

At St James Park, the fan-ownership ratio sits at around 52%, tipping the balance over the magic 51% majority supporter shareholding that is both compulsory and successful in Germany.

In reality, little can pass at the club without the go-ahead of Exeter fans, meaning supporters must consent to any significant change (eg. kit colour, club badge, stadium) or expenditure.

What fan-ownership has brought is continuity and on-the-ground expertise in running a community business. Exeter have been able to renovate their historic ground while nurturing a fantastic six-pitch training venue at Cliff Hill, adorned with murals of academy graduates.

That continuity extends to management with the Grecians going through just two managers in the past 12 years when others have hired and fired a handful each. The current boss, Matt Taylor, was promoted from the Grecians’ highly successful youth academy, accentuating the flow from kids football to the first team.

The academy train with the first team at Exeter and such homegrown talent as the versatile Archie Collins and the live-wire Jack Sparkes were part of the Grecians’ excellent 2-0 win at home to Port Vale which cemented their place at the top of League Two last week. This has been a slowly-slowly success, not promotion for promotion’s sake, and they will go up when the club is ready.

Some have pointed to sales of youth products such as Ethan Ampadu – who joined Chelsea in in 2017 – but to a club of Exeter’s size, player sales are a by-product of a successful academy.

The Grecians have stuck with their fan-owned principles while competing in a league with too many financial dopers, vultures, chancers and crooks and are coming out on top by playing the long game with fans at the heart.

Imagine if Exeter’s fan-owned model was the rule, not the exception. And imagine if football’s focus was on promoting the Exeter way rather than throwaway commiserations to broken clubs such as Bury.