Home All The News FA needs fundamental change: ‘I just shake my head and laugh’ 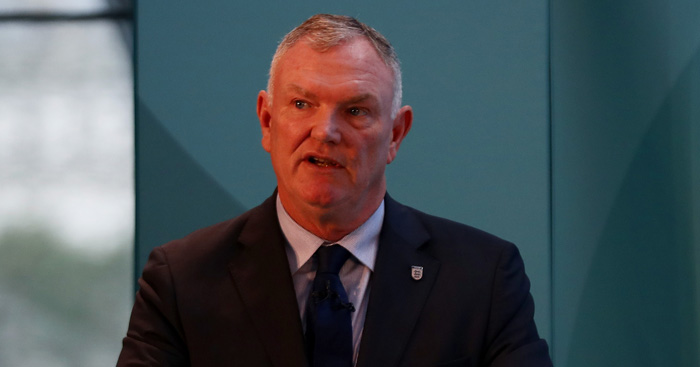 The Football Association has been urged to make fundamental changes in its approach to diversity issues following the resignation of Greg Clarke over “harmful, archaic” and “deeply offensive” remarks.

The 63-year-old apologised after he used the word “coloured” to describe black players and insinuated that being gay was a “life choice”, during a video link appearance before a Digital, Culture, Media and Sport committee.

Speaking to BBC Breakfast, Cole said: “He was in a position to know that the word ‘coloured’ is not a word to be used, and he has lost his job now due to that.

“But we keep talking about diversity, now hopefully we will continue to progress and keep moving forward and doing the right things.

“I just shake my head and I just laugh, because him being in that position he’s supposed to be better – he’s fighting the cause for diversity.

“We used to wear t-shirts once a year or whatever it was, that’s just not enough. That’s how I feel about it. When I talk about progression, it means we have to progress.”

Clarke’s comments were branded “harmful”, “archaic” and “deeply offensive” by a host of anti-discrimination groups.

Clarke was also condemned for saying that black and South Asian people had “different career interests” from each other, and drew complaints for saying a women’s coach had told him that the lack of women’s goalkeepers was due to girls not liking the ball being kicked at them.

Bhandari said on Sky Sports News: “We are not just talking about anybody here, we are talking about the leader of our national game on a really major strategic issue for the FA, which is driving greater diversity and inclusion, making everyone feel they belong in the game.

“These were archaic attitudes which were really revealing themselves in comment after comment – a well-briefed chair or CEO would know exactly how to navigate that.

“It is not as if this is the first time, there have been previous incidents – like referring to institutional racism as ‘fluff’.

“What it shows is there is an attitude underlying which is really not the right attitude to be leading the English game.”

The FA finds itself embroiled in new controversy just two weeks after it launched a new diversity code, which aims to ensure more candidates from ethnic minorities can land top jobs.

In 2017, former England forward Lianne Sanderson gave evidence alongside Eniola Aluko at a parliamentary inquiry into allegations of racism within the game during which Clarke was criticised for describing the accusations as “fluff”.

Sanderson believes Tuesday’s developments show how much work there is still to be done on the drive for equality.

“I often question how these people get into these positions in the first place, and then we wonder why racism and homophobia is on the rise,” Sanderson told Sky Sports News.

In announcing Clarke’s departure, the FA said: “We would also like to reaffirm that as an organisation, we are absolutely committed to doing everything we can to promote diversity, address inequality, and tackle all forms of discrimination in the game.”

The FA is yet to set out the process for the appointment of his successor, but the preferred candidate would need to be approved by the FA Council.

Clarke is also one of three FIFA vice-presidents representing UEFA and reports on Tuesday night suggested he will step away from that role too.

Cole’s former Manchester United team-mate Gary Neville called for a fundamental overhaul over the governance of the game.

Neville tweeted: “Compelling evidence again yesterday as to why an independent regulator is required for football. Football cannot govern itself!”