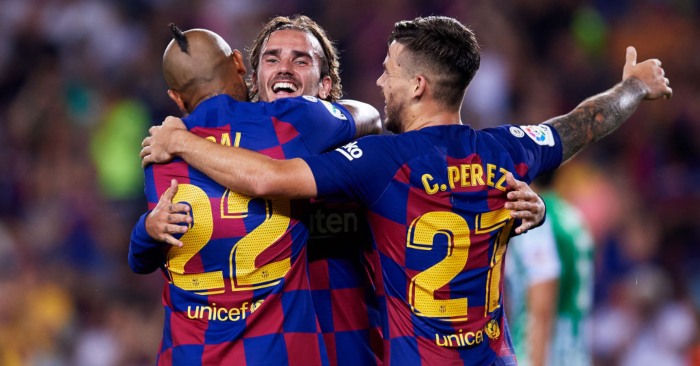 Antoine Griezmann has admitted his number one target this season is Champions League glory with Barcelona.

The France international is poised to make his second appearance in the competition for Barca on Wednesday night against Antonio Conte’s Serie A leaders Inter Milan at the Nou Camp.

“The Champions League is my dream and my main objective,” Griezmann told a press conference. “However, we have to take it slowly and pick up three points against Inter.”

Griezmann has scored three goals in seven LaLiga appearances since joining Barca in July after paying his £107million buyout clause but drew a blank in last month’s opening Group F fixture, which ended 0-0 in Dortmund.

Inter also drew their first Champions League game, 1-1 on the road against Slavia Prague, but under new boss Conte, who replaced the sacked Luciano Spalletti in May, they have a 100 per cent record after six games in Serie A.

“Antonio Conte is a great coach, who works really hard with his team and gets great results,” Griezmann said. “It will be difficult and we will have to play as well as we can to get all three points.”

Griezmann said Barca’s first home Champions League match of the season will be extra special as he could go head to head with former Atletico Madrid team-mate Diego Godin.

Uruguay defender Godin signed a three-year deal with Inter in July after his Atletico contract had expired.

“We played against each other in the World Cup and I grew as a player a lot alongside him and it is always nice to see someone like him,” Griezmann added.

“Godin is a great friend, an example for me and we have a family relationship because he is godfather to my daughter.”

Inter, who won 3-1 at Sampdoria on Saturday, will be at full-strength as they bid to win at the Nou Camp for the first time.

“It will be a hard game and we are in a tough group,” Conte told a press conference. “It will be interesting. It won’t be easy, we know that.

“Slavia made it very difficult for us in our last game. We are ambitious. We want to go far in the competition. To do that, we need the points.

“But playing here is not easy. Barca are one of the best in the world, but we will play our game. We have respect for Barca, they are one of the favourites to win.”