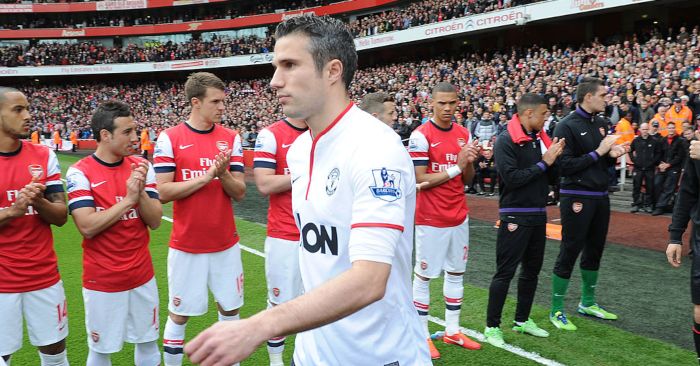 Where did the guard of honour come from? This one is for you, Danny Murphy.

It was Matt Busby who orchestrated the first known example of a guard of honour in top-flight English football. Chelsea captain Roy Bentley later recalled that he “made sure we got the full red-carpet treatment” at Stamford Bridge in the final game of the season, the legendary manager even eulogising the Blues in the match programme. Bentley went on to score in a 2-1 defeat to a United side that finished fifth, five points behind.

The year: 1972
The honoured: Arsenal
The honourees: Leeds
The reason: Arsenal’s Double the previous year

Quite why it took Leeds until March 1972 to formally congratulate Arsenal on their First Division and FA Cup Double in 1971 is a mystery. But those with infinitely more knowledge suggest that Don Revie and his players ‘acted as perfect hosts’ when welcoming the champions to Elland Road. And then they hammered the Gunners 3-0 before almost replicating their success by winning the oldest national football competition in the world and finishing a narrow second behind Derby in the league.

A gesture in tribute for Arsenal Football Club's feat in winning the League Championship and FA Cup double the previous year. pic.twitter.com/xwnAMAEJIp

Leeds would soon have their moment. Liverpool’s 1-0 defeat at home to Arsenal on April 24 confirmed that the wonderful Revie would have a championship to show for his final season in charge, and QPR were happy to pay tribute to one of the most dominant teams of the era. Allan Clarke capped the club’s stellar campaign with the only goal in west London, before those title medals were consigned to the biggest f**king dustbin the players could find.

The year: 1979
The honoured: Liverpool
The honourees: Leeds
The reason: Liverpool’s third title in four years

It might be that Liverpool were toasted by the opposition for their exploits in 1973, 1976, 1977 and beyond, but the only official record is of Leeds yet again upholding tradition and paying their respects to a team that would reign as European champions for only two more weeks in 1979. Liverpool thanked them by securing a 3-0 win at Elland Road that set two unbroken top-flight records: most points in a top-flight season with two for a win (68); and fewest goals conceded in a 42-game campaign (16).

The year: 1991
The honoured: Arsenal
The honourees: Manchester United
The reason: Winning the First Division title (and thus stopping Liverpool)

Alex Ferguson had a Cup Winners’ Cup final against Barcelona to prepare for nine days later but was never likely to miss an opportunity to recognise greatness and humble his players. Manchester United lined up to applaud a supreme Arsenal side at Highbury before Alan Smith scored a decisive hat-trick. Their previous league meeting that season remains the only occasion on which an English league team has been deducted points for player misconduct, which is fun.

Manchester United giving the champions @Arsenal a guard of honour in 1991. [@footballdaily]. 👏

While there is no mention of it in any historic match reports or other media surrounding the final game of the 2002/03 season, Sky Sports state that ‘Everton also celebrated United’s title success’ at Goodison Park in May 2003, a week after Arsenal’s defeat to Leeds handed them the crown. It does sound like a very David Moyes thing to do.

‘I had no intention of surrendering to Abramovich’s wealth in the months to come,’ wrote Sir Alex Ferguson in his 2013 autobiography of the time he ordered his players to assemble and welcome England’s new champions to Old Trafford. Chelsea returned the favour by coming from behind to win and set a new Premier League points record of 94, which they would extend with a draw at Newcastle – who also provided a guard of honour – on the final day. Roy Keane is happy to snipe at anyone and anything but has sadly never publicly divulged his thoughts on captaining a United side during such a show of obsequiousness. So Gary Neville’s thoughts will have to do.

Like your mrs leaving you and being asked to hang the new blokes clothes up in your old wardrobe!!

While Neville, Keane, Rio Ferdinand, Paul Scholes, Cristiano Ronaldo, Wayne Rooney and Ruud van Nistelrooy were in the starting line-up that gave Chelsea a guard of honour two years prior, neither Ferguson nor Mourinho picked full-strength teams when the Blues offered that same courtesy at Stamford Bridge in 2007. We did at least get the sight of John Terry clapping Kieran Lee, Chris Eagles and Dong Fangzhuo onto the pitch before a 0-0 draw. Yet Kevin de Bruyne shouldn’t be expected to muster a clap or two for members of one of the most dominant teams in Premier League history.

A cagey 1-1 draw against Blackburn in the previous game had delivered what remains Manchester United’s penultimate Premier League title. Blackpool needed an unlikely win at Old Trafford to preserve their top-flight status on the final day and even took a brief 2-1 lead through Charlie Adam and Gary Taylor-Fletcher, but eventually lost 4-1 to a team that had dropped two points at home all season. Nevertheless, it was a given that Ian Holloway would get his players to pay tribute before the game.

The year: 2013
The honoured: Manchester United
The honourees: Arsenal
The reason: The little boy within Robin van Persie

One of the most memorable guards of honour, for sure. Absolutely the most awkward and compelling, as Arsenal stood in orderly fashion to welcome England’s new champions to a soundtrack of boos that built to a crescendo as Robin van Persie was the last United player to walk out, later scoring a penalty on his return to north London. “I want the traditions of English football to be respected,” said Arsene Wenger. “That is what great clubs should do,” said Ferguson. “**** off you ******* ******** ************ Marouane Chamakh wannabe ******* ********,” said the Arsenal fans.

The greatest moment in Robin van Persie's career. Left Arsenal to win the Premier League title with Manchester United and ended up getting a guard of honour from his former teammates.

Even though Jose Mourinho pointed out that “it’s a bit artificial” if “some of them don’t want to be there and they are just there because somebody tells them to be there”, Brendan Rodgers ensured the manners of his Liverpool players did not slip in 2015. Steven Gerrard admitted “it wasn’t nice doing it” but did spare a word or nine for the Chelsea fans that had taunted him all game before partaking in a standing ovation upon his 79th-minute substitution: “Nice of them to turn up today for once.”

The year: 2016
The honoured: Leicester
The honourees: Everton and Chelsea
The reason: Leicester had won the sodding title

With Tottenham only managing a draw against Chelsea in Mark Clattenburg’s directorial debut, the miracle was complete. Leicester were Premier League champions and had two games – home and away – to bask in that glory. First was Everton at the King Power Stadium, who duly rolled over in a 3-1 defeat. Then came the team Leicester had replaced on the throne, as Chelsea marked their worst season in a generation by applauding the Foxes on at Stamford Bridge and letting Danny Drinkwater score what would be his first goal of many at his future home.

Chelsea, much as Manchester United, seem to do it because they know the roles will be reversed soon enough. That came to pass the following year when Antonio Conte guided them to the summit with two games to spare, both of which Watford and Sunderland marked appropriately at Stamford Bridge. It would regrettably not be the last guard of honour of Chelsea’s season, as will soon become clear.

There was no time for a guard of honour in either 2012 or 2014, with both titles won on the final day. So Manchester City decided to claim their third Premier League trophy with five games left, the first four of which were honoured by Swansea, West Ham, Huddersfield and Brighton. But not Southampton, as Mark Hughes explained: “I did ask about if we were going to do that but they said they were going to have a line of flags, kits and guys from the academy so we thought that was more appropriate but it wasn’t a sign of disrespect from ourselves – absolutely not.”

Honourable (get it?) mention:
That time Chelsea and Sunderland gave John Terry a guard of honour to mark his final game before joining Aston Villa, only for Chelsea to give him a second guard of honour in the middle of the actual match when he was subbed off in the 26th minute.