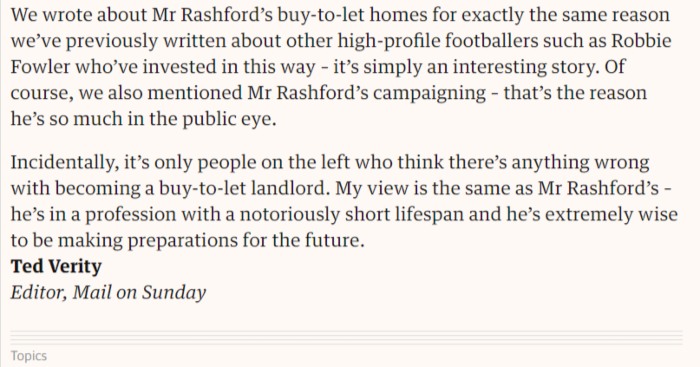 That’s the only appropriate opening response to the letter sent to The Guardian from Mail on Sunday editor Ted Verity in defence of their article about ‘campaigning’ Marcus Rashford and his investment in five ‘luxury homes’ that are neither luxury nor homes. And definitely not news.

In case you have been hiding under a bush – it’s the only reasonable way to avoid coronavirus – the MoS wrote this. Which prompted this from the excellent Jonathan Liew. Which has now resulted in this.

‘The premise of Jonathan Liew’s article (Mail on Sunday v Marcus Rashford: a sinister attack on a young black man, 16 November) seems to be that our writing about Mr Rashford purchasing buy-to-let homes is (a) somehow racist, and (b) part of some rightwing plot to discredit him. But these claims are as offensive as they are wrong and ignore several important points.’

Mediawatch cannot stress enough that using the word ‘racist’ first really does make you look a tiny bit racist. Liew never accused the MoS of being racist and actually, Rashford’s colour was only referenced once by the Guardian man as he wrote that ‘in a way, Rashford is the populist right’s worst nightmare: a young, black, working-class campaigner who bases his appeal not on culture war or tribal loyalty or fiery invective, but on unity, consensus, the common ground’.

Odd how the MoS are not keen to deny that the article is in any way prejudiced towards the young, the working-class or those who believe in unity and a consensus of care. Maybe those are a given.

Oh and you really would think that the editor of a right-wing newspaper would have known it needs a hyphen.

‘First, last month (25 October) our columnist Sarah Vine wrote a stinging article about the government’s disastrous response to Mr Rashford’s free school meals campaign. While she had only hostile words for the government, she described Mr Rashford as a “role model” and “a sincere young man who understands the issues from his own experience and who is trying in a dignified way to bring them to the fore”. The following week, we carried a 1,000-word piece across two pages from Mr Rashford himself about his campaign, which, as our headline said, has “inspired the nation”.’

Some valid points, though Sarah Vine is the wife of Michael Gove – described just this week in the Mail as a ‘frenemy’ of Prime Minister Boris Johnson after running against him in the Conservative leadership race. Gove is also described as having ‘few friends in Government’ so it is hardly surprising that Vine would back Rashford in that particular battle.

Oh and fair to say that Rashford himself might be regretting putting his name to a Mail on Sunday article after this week’s floater.

‘We wrote about Mr Rashford’s buy-to-let homes for exactly the same reason we’ve previously written about other high-profile footballers such as Robbie Fowler who’ve invested in this way – it’s simply an interesting story. Of course, we also mentioned Mr Rashford’s campaigning – that’s the reason he’s so much in the public eye.’

When you are searching the archives for an example of a report on footballer finances to strengthen your case that this is not a ‘plot to discredit’ Rashford and your first and only example is a footballer who left these shores over a decade ago, then you really are doing more harm than good to your defence. Especially when that footballer was a young, working-class Scouser who really should have known his place.

And Lampard is hardly unusual. In The Times in 2014, they wrote that ‘if you rent a flat in central London, Bristol or Manchester and you are not exactly sure who your landlord is, this may be because he’s a premiership footballer. An increasing number of footballers are choosing to forgo the £10 million trophy home in Cheshire and are buying a string of buy-to-let properties instead.’

Odd then that Rashford is the first property-buying footballer in over a decade to be of any interest to the Mail on Sunday, at exactly the same time he is taking on a right-wing government.

‘Incidentally, it’s only people on the left who think there’s anything wrong with becoming a buy-to-let landlord. My view is the same as Mr Rashford’s – he’s in a profession with a notoriously short lifespan and he’s extremely wise to be making preparations for the future.’

And incidentally, you might have just admitted that actually – rather than being racist – the piece was a thinly veiled attempt to highlight the supposed hypocrisy of those on the left for criticising buy-to-let landlords while supporting Rashford and his campaigns for social equality.

Or perhaps we are reading rather too much into this when the only – correctly hyphenated – phrase we need is ‘dog-whistle journalism’.

The truth is that the Mail on Sunday badly misjudged this because it’s not just ‘people on the left’ who would take Rashford’s side in his children for such evildoings as feeding children and giving children books to read.

And it’s not just ‘people on the left’ who think that the MoS editor has succeeded only in digging himself a massive, f***-off hole. Perhaps he could now rent it out.