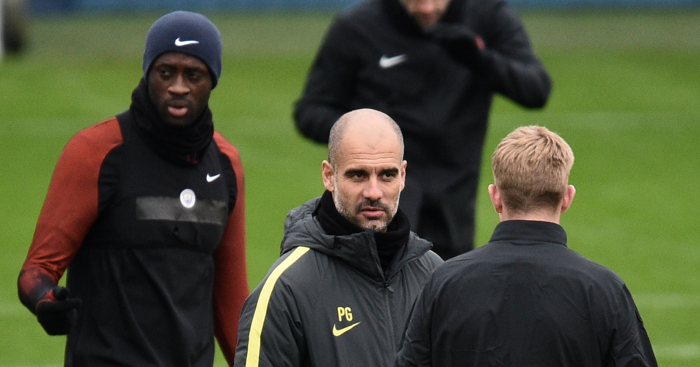 Guardiola was the subject of controversial comments made by both Yaya Toure and the midfielder’s agent Dimitry Seluk on Tuesday.

Toure accused the Spaniard of having “problems with Africans”, while Seluk doubled down and placed a “curse” on the manager.

De Bruyne “never saw” signs of any such prejudice this season.

“I never saw something. It would be weird if the trainer was racist – with all the black guys in our team,” De Bruyne told BBC World Football.

“So I don’t know what Yaya said or if it’s wrongly written or exaggerated. When you don’t play there’s always something you try to find.

“We had the best season ever, so in the end the coach took the right decision to play with the team who played a lot. This year the trainer probably thought he wasn’t doing enough, wasn’t fit enough. I’ve never seen something racist at the club, ever.”

Guardiola himself was quizzed about Toure and Seluk’s controversial claims, and unsurprisingly offered little in response.

“I’m not going to comment on those comments. I have nothing to say.”