Home All The News Guardiola defends decision to leave out Aguero 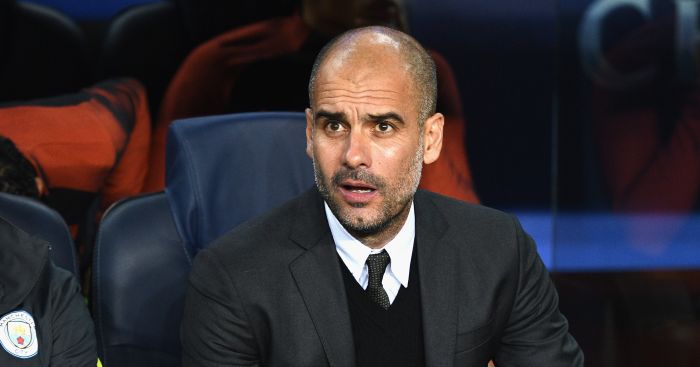 Pep Guardiola defended Claudio Bravo and his decision to leave out Sergio Aguero after his Barcelona homecoming ended in a 4-0 thrashing for Manchester City.

The ruthless Lionel Messi scored a hat-trick while Neymar, who also missed a penalty, added a late fourth in a frantic Champions League Group C clash at the Nou Camp.

Yet as brilliant as five-time world player of the year Messi was – once again – City boss Guardiola also found himself in the firing line over the defeat. He was our early loser.

Guardiola surprisingly decided to leave fit-again star striker Aguero on the bench and then saw Bravo, the goalkeeper in whom he has invested much faith, blunder.

Bravo, signed from Barca for his ability to play with his feet, misplaced a pass to Luis Suarez and then handled his attempted lob outside the box, earning a red card.

The score was only 1-0 at that point in the 53rd minute, and Barca – and Messi in particular – dramatically turned up the heat.

Asked about his philosophy concerning goalkeepers playing out from the back, Guardiola said: “There will be no change. It stays the same. I’m sorry, until the last day of my career as a coach I will try to play from our goalkeeper.

“Sometimes there are mistakes and sometimes you have to kick the ball out but most of the time, when we play good, it starts from there.”

He said: “It is a game of mistakes and correct decisions.

“It’s just bad luck that I was the person that changed the course of the game, but it’s like that.

“We must keep working hard and look at the next games.”

Guardiola insisted the defeat was not the worst of his career.

Asked whether that was the case, he answered: “No, that was against Real Madrid for Bayern Munich, because in that moment I didn’t make the correct decisions.”

There had been fitness concerns over Aguero last week but Guardiola confirmed the decision to name him on the bench was tactical, leaving Kevin De Bruyne to operate as a makeshift striker, or ‘false nine’.

Guardiola said: “It was my idea. I wanted one more midfield player in that position and that was the reason why. I spoke with him and he was good.”

The result left City trailing Barca by five points in Group C, with the Spanish champions boasting a 100 per cent record after three games.

Guardiola said: “We came here and played with huge personality but it is always difficult to play Barcelona with 11. With 10 the game was over. Until then the game was open.

“We created enough chances to score one or two goals but we know Barcelona, with their strikers, when they arrive they punish you.”

Barca coach Luis Enrique admitted the result may have flattered his side but was pleased with his forwards’ efficiency.

He said: “We knew we needed the ball and tried to play with a lot of pressure to make the most of any mistakes City made.

“Maybe the result was a bit exaggerated but when you make clear mistakes and you have three players up front like the ones we have, those mistakes are decisive.”