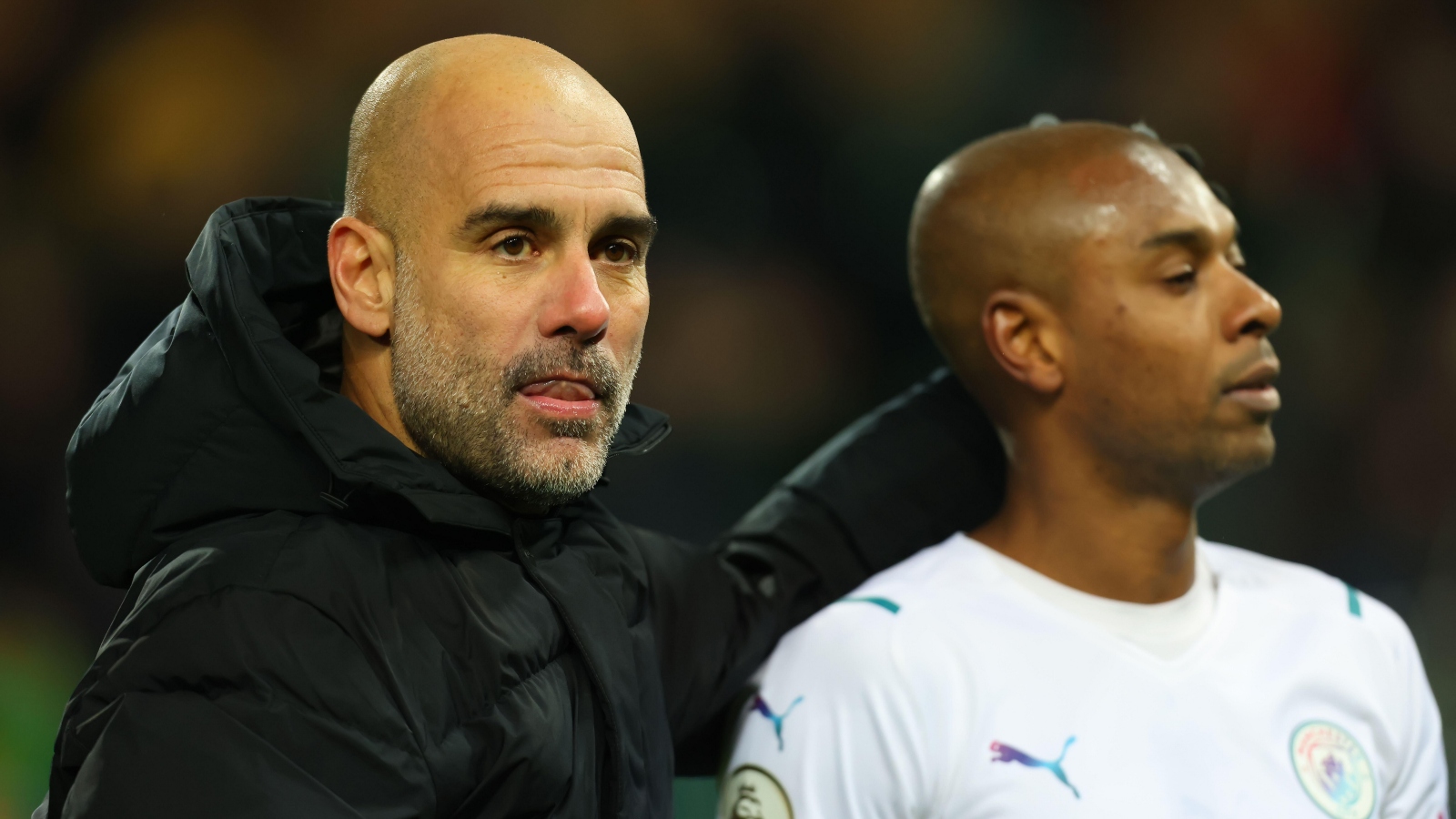 Pep Guardiola says he will talk with Fernandinho at the end of the season after the Brazilian revealed he is planning to leave Man City this summer.

Out of contract at the end of the season, when asked if he plans on signing a new deal, Fernandinho responded: “No, I don’t think so.”

When asked about the 36-year-old’s decision, Guardiola said (via Manchester Evening News): “Oh. I didn’t know. You give me the news. I didn’t hear it. We will see what happens. I don’t know what will happen. He is so important. I’ll ask him.

“At the end of the season we talk, maybe it’s because of his family. I would love it. We will talk.

“The role he plays this season, I like the people who behave behind the scenes. I know what he has done, behind me, he handles many of our players and stars for the benefit of the team. I praise him and he was here when I arrive.

“An incredible player for Man City. There are things nobody knows but I know exactly.”

Guardiola continued: “Maybe Txiki [Begiristain] knows and didn’t tell me. I don’t know, it was a surprise. I know his intentions, another player might have benefits or hide something. Fernandinho is not, it happened.

“Absolutely, I said many times, I want him to be happy. We play tomorrow for him. Give him the best farewell moment reaching the semi-finals, after [we will] try to go through. I understand, play with happiness, if he wants to play it’s understandable.

“For players until 2023, if a player wants to leave I understand completely, look at Ferran Torres. I don’t want anyone unsatisfied. For his age, for his family in Brazil. The club will help him.”

Guardiola confirmed that Ruben Dias – who recently returned to training after an injury – will travel to the Spanish capital for City’s Champions League quarter-final second leg against Atletico Madrid.

“Dias travels with us, the rest all are fit,” he said. “Maybe tomorrow, I don’t know [if Dias will play].

“He makes one training session and six weeks off. The fact he’s back is incredible and we have a big schedule until the end of the season. Everyone will be important.”

On the match against Atletico: “We travel with a good result with the intention to win. We try to see the score in the last 5-10 minutes, what it is.

“It will be slightly different, they are at home, they create momentums. For the passion all the fans have, they will be moments they will be so aggressive and create problems. We adapt and try to defend.

“It will be a different game, not like last week. They’re at home with their fans behind them. From what I remember from knockout games they have really exciting moments in the Calderon, at the Wanda they create problems, defend and counter.

“They will be more intense in the top half of the field than they were the other night. We adapt and if we’re losing we go with everything to get it back. If we’re on top maybe we sit a bit deeper.”

On the hectic fixture schedule, the Man City boss said: “In that period, we are close to the end of the season. We have to be grateful to be here.

“I would like to have more time to prepare but it’s because we’ve done really well so far. In that moment we aren’t tired, we are so close to the semi-finals, we can lose because we make a bad performance or the opponent is better but we are not tired.”