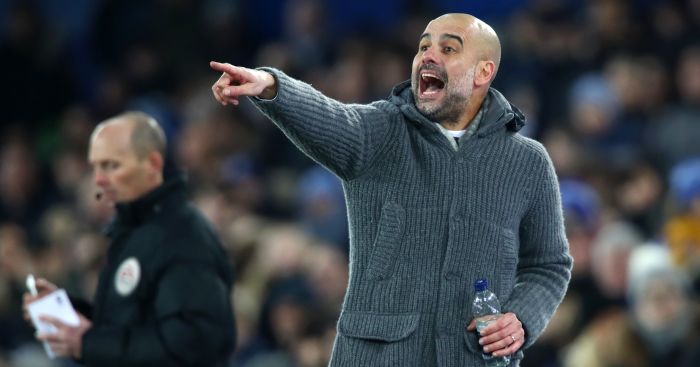 Pep Guardiola vowed to continue Manchester City’s title push for years to come after moving four points clear of Liverpool with a Raheem Sterling-inspired win kicked off in controversial fashion against Watford.

The reigning champions laid down the gauntlet to Jurgen Klopp’s Reds on Saturday evening as their in-form forward netted a second-half hat-trick in just 13 minutes 12 seconds.

Sterling completed his treble with a smart finish, but the way the England international opened the scoring brought with it the Premier League’s latest offside controversy.

Appearing offside when played in by Sergio Aguero, referee Paul Tierney awarded the goal after lengthy consultation with assistant Eddie Smart after the ball rebounded in off him thanks to Daryl Janmaat’s clearance.

“Well, I guess the first question would be like this,” Guardiola said in the post-match press conference.

“My first comment is we won because we deserved to win by far. We were the better team on the pitch.

“Honestly, just in case it’s offside, I am sorry. I don’t want to do that but I don’t know. Really sorry if it is.

“Some referees say it is, sometimes another one says no. But there is a simple solution.

“It should be here this season but next season VAR (will be implemented) and that will not be a problem, and it will be more fair.

“There are other games it was the same – an offside goal and they score a goal, some games with the diving, with penalties – so the VAR is helping us.

“At the beginning of the season, Manchester City voted to install the VAR from this season and some other clubs didn’t accept that.

“So, hopefully next season like in Europe it can install the VAR and this kind of situation will be fair.

“So, I am so sorry, apologise, to Javi (Gracia) and the club Watford if the first goal is offside, but we made an incredible game and we played good in the first half.”

Guardiola was frustrated by the questions about officiating and complicated rule system, just as he was irked by a report on the eve of the game that he had verbally agreed to join Juventus on a four-year deal.

“I have two more years here and I am (not) going to move,” he said. “Impossible. Except if they sack me and after I go home.

“But if Manchester City want me, I will stay two more years by far – and hopefully another one.

“I am not going to Juventus in the next two seasons.”