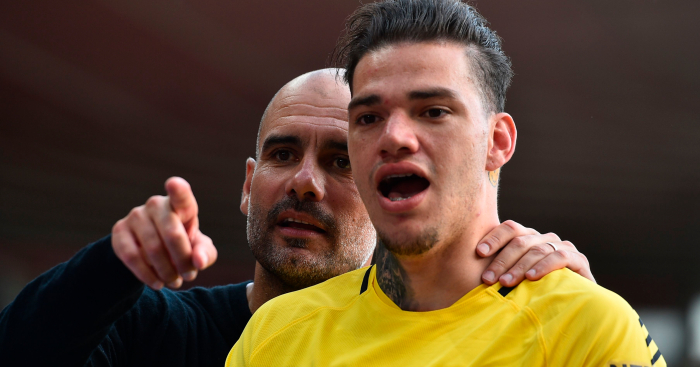 Pep Guardiola has called for the Premier League to consider changing their rules over emergency signings.

It left City with youth keeper Daniel Grimshaw as the only back-up to Ederson, with Angus Gunn and Joe Hart having already been sold this summer.

With the Premier League transfer window having shut at the start of the month, City were forced to recall Aro Muric from his loan spell with NAC Breda, but Guardiola admits he isn’t sure what City would have done if that option were not available.

Who’d have thought an injury to Claudio Bravo would cause such a bloody panic?

“The rules are the rules so maybe the federation can think about that when there are long, long injuries and it is still the period where the European window is open,” he said.

“Then maybe you could do it. Not just for the goalkeeper but when there are big, big injuries to players.

“If we were not allowed to bring back Aro, I don’t know what would have happened.

“But here it is closed because it is good that the competition starts with the whole squad but maybe we could think about that, especially when the injuries are five or six months.”

Asked whether City would have used the option to sign an experienced keeper on an emergency deal if possible, Guardiola replied: “We would have considered it, that is true.

“We didn’t have any options. People were talking about us buying this player in Barcelona or this keeper in Madrid but it is not allowed so it makes no sense in that situation.

“We called the Premier League to know the situation but here the rules are the rules. They told us it is possible for him to come back and after that Aro came back.”