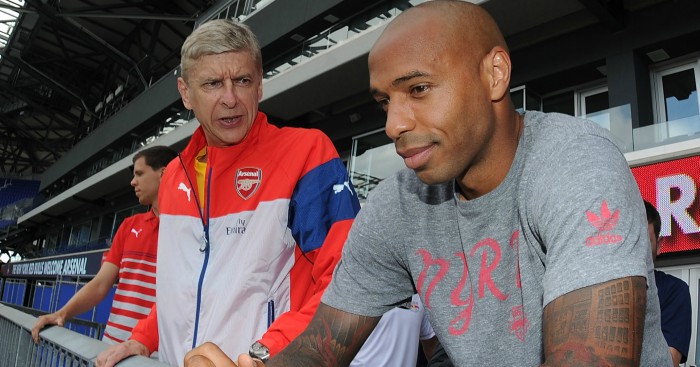 Arsene attack
It is not often at all that Mediawatch will find itself sticking up for The Sun‘s Neil Ashton, a man who should probably become a driving instructor at some point, such is his mastery of the U-turn.

But sometimes even we are surprised at the lengths some people will go to to drive traffic, particularly when those lengths involve selling your own chief football reporter down the river.

Save your sympathy, for Ashton is in Monaco to report on Thierry Henry’s first press conference as the club’s manager. Writing for a national newspaper really can be a difficult gig sometimes, can’t it?

Henry obviously referred to his playing career quite often, particularly the influence Arsene Wenger and Pep Guardiola had on him.

“I owe all my managers,” said the Frenchman. “I learned the most when things did not go so well.

“Arsene made me understand what it was to be a professional and to show what it takes to perform at the highest level. Everyone knows my association with him. You learn from people like that and they inspire you. He unlocked a lot in my mind for me and I carry a lot of stuff from him.”

At least that is what Ashton writes in the newspaper version. On The Sun website, the only quote in which Henry mentions Wenger is this:

“Everybody knows my relationship with Arsene Wenger. He showed me what it took to be a professional.”

Which misses out quite a large and important portion. But that is nothing compared to how his comments on Guardiola are interpreted.

“Pep is a reference. I re-learned how to play the game under him. There comes a point when you need to fall asleep eventually, but Pep will still be talking about it. He is ahead of the game. Some of his invention – well, I saw it for myself.”

Lovely words. Now, put that through The Sun website’s click-hungry translator, and what do you get?

“Pep is the reference for me. I had to re-learn at Barcelona how to play the game. You could fall asleep on Pep and he would still be talking about football.”

And if you are in any doubt as to what Henry did actually say, watch for yourself. The addition of an “I had to” in the quote about “re-learning” the game really does change the entire context.

To complete the hatchet job, the headline to the website’s story leaves the reader in no doubt that Henry was coached improperly by Wenger at Arsenal, and Guardiola was forced to correct those mistakes:

Ashton’s byline is obviously in both the newspaper and the online version of the stories. So this is either a terrible case of schizophrenia, or someone has decided to sensationalise – and completely change the meaning of – some quotes. And as tough as the international break is in terms of generating traffic, you can’t really do that.

Shock and awe
Darren Lewis of the Daily Mirror can join Ashton in questioning his headline writers. His story on Antonio Conte becoming ‘a serious contender’ for the Real Madrid job is given the website treatment too.

‘Antonio Conte shock candidate for Real Madrid job – if they can agree Chelsea pay off,’ reads the Mirror online’s headline, despite Lewis never describing it as anything like a ‘shock’. Mainly because it wouldn’t be: elite club consider out-of-work elite manager is not exactly a bombshell.

But Mediawatch does have to question Lewis on one thing: can you really call a compensation package a ‘£10m kiss-off?’

The answer is no.

Dier wolf
Credit to Sam Allardyce, who has told Sky Sports that he “really slipped up” when he said Eric Dier was “no better or worse” than Sergio Busquets.

“But it was on the night, on the day, he was better than him,” he explained. “I mean, in career terms he’s not.” And he’s right.

“What I was, was sticking up for Eric Dier on the amount of stick he’s been getting. ‘He’s not good enough for England’ and all this. ‘He shouldn’t be playing’.

“You know what I mean? A lot of negative comments in the press I’ve read about him.”

We know exactly what you mean, Sam. You were defending a player you thought the media was being overly critical of.

So why did you dig out Busquets and say “the praise” surrounding him “must be stopped”?

Sign of The Times
‘A tear rolls slowly down the cheek of a child staring at a pitch waterlogged again, at another game called off, at some fun with friends cancelled again and a chance of vital exercise ruined. Forgive the melodrama but this is a scene witnessed across the country again and again. Now the FA blazers, as well as rain, stop play’ – Henry Winter, The Times.

‘Melodrama’, in a piece saying ‘FA blazers have shamefully betrayed the nation’s children’? Not a chance.

‘The men who wanted to sell Wembley were red-faced last night as they were left with no buyer after Shahid Khan sensationally withdrew his £600million offer.’

Did he do an elaborate, choreographed dance routine? Did he have an orchestra play him out afterwards? Just how sensational was this withdrawal?

Push the envelope
Writes David Maddock in the Daily Mirror:

‘Jurgen Klopp will no doubt envelope Erik Durm in a trademark bear hug when reunited with his former Borussia Dortmund defender at Huddersfield.’

‘This is 2018’ headline of the day
‘Harry Kane helps out Dele Alli with stunning sniper shot as Tottenham and England duo enjoy Fortnite gaming session’ – The Sun.

Recommended reading of the day
Marina Hyde on the Manchester United takeover stuff.