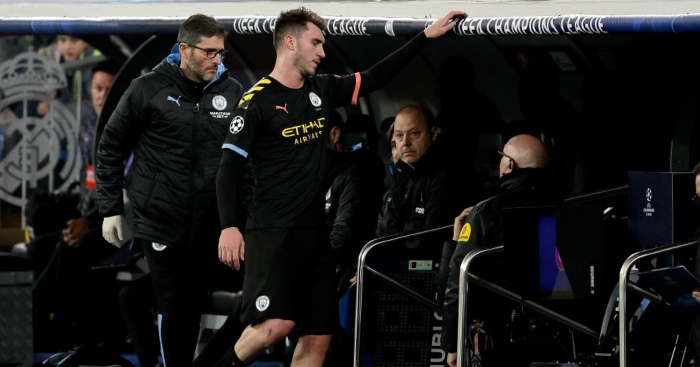 Manchester City defender Aymeric Laporte could be out of action for up to a month with a hamstring injury, manager Pep Guardiola has confirmed.

Laporte, who has made just eight appearances in an injury-ravaged season, was forced off in the first half of Wednesday’s Champions League victory at Real Madrid.

Guardiola said: “He has a hamstring injury, three weeks out more or less, a month. Unfortunately this happens after four or five months out.”

The injury is likely to keep Laporte out of this weekend’s Carabao Cup final, a Manchester derby and the second leg against Real.

The 25-year-old has been sorely missed by City, who have failed to mount a strong defence of their Premier League title, throughout the campaign.

Guardiola said: “Life is not easy and always in the world the people who survive are the ones who cope with the bad moments. It is what it is. Accept it, work hard to come back as soon as possible.”

City will go into Sunday’s showpiece against relegation-threatened Aston Villa at Wembley on a high after their stunning success at the Bernabeu but Guardiola has warned against complacency.

He said: “It’s much better to go to play a final after a good result in Madrid but we cannot live a final thinking how good we were.”