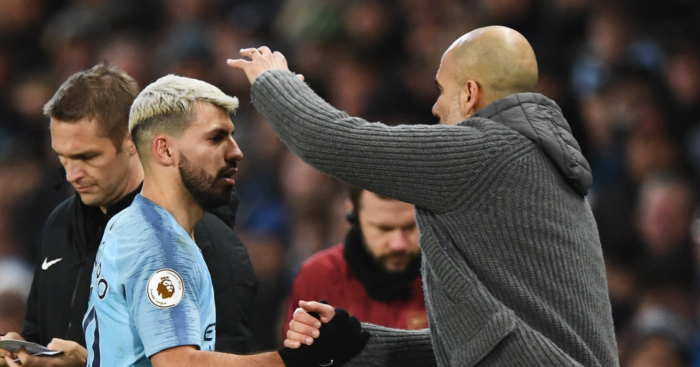 Pep Guardiola claimed the pressure remained on Manchester City despite overpowering Arsenal to turn the heat up on Liverpool on Sunday.

Sergio Aguero scored a hat-trick as the champions moved back to second and cut Liverpool’s lead at the top of the Premier League to two points with a 3-1 success at the Etihad Stadium.

The onus is now on the Reds to respond as they play their game in hand at West Ham on Monday night.

But Guardiola said: “I prefer to be in the position of Liverpool. The pressure is when you are behind and you lose points. That’s tougher.”

City proved too strong for the Gunners, even though there was an element of controversy over Aguero’s third goal.

The ball struck the Argentinian’s arm as he bundled in from close range just after the hour – something he admitted later – but it was deemed unintentional. It secured his 14th hat-trick for City and his 10th in the Premier League, one short of Alan Shearer’s competition record.

“Today he fought and did everything for the team,” said Guardiola of Aguero’s fine all-round performance.

“From the beginning, I was very pleased. In the first season, people said I didn’t like him but always I was delighted.

“I judge the intention. The intention from Sergio was always perfect since we’ve been together.”