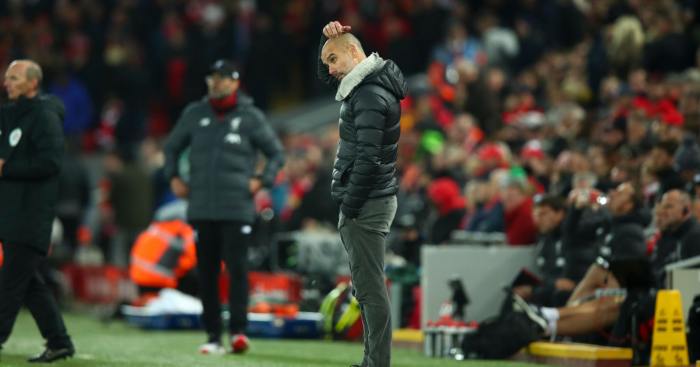 Pep Guardiola is unhappy at Manchester City and Bayern Munich are looking to capitalise on the situation, according to reports.

After pipping Liverpool to the Premier League title last season, Guardiola finds his City side nine points off the pace and occupying fourth position below Leicester City and Chelsea.

Their 3-1 defeat to leaders Liverpool on Sunday saw Guardiola sarcastically praise the officials at the end of the match after a couple of controversial VAR decisions.

And following the defeat, The Athletic claimed that the real ‘craziness’ in the managerial world could come if Guardiola leaves City in the summer with ‘a feeling in some circles’ that this will be his last season at the Etihad Stadium.

And, on Wednesday, Sport Bild (via Sport Witness) have said that Guardiola is ‘no longer happy’ at City despite having a contract until the summer of 2021.

Guardiola is one of three candidates that Bayern Munich have shortlisted to replace the recently departed Niko Kovac, with Ajax’s Erik ten Hag and PSG’s Thomas Tuchel the other two.

The Spaniard, who apparently still owns a flat in Munich, has been in ‘regular contact’ with the Bavarian club’s bosses since leaving for City.

The report adds that Guardiola would ideally like to manage a national side but Bayern won’t rule out the possibility of their former boss making a return to the Allianz arena.

Sport Bild continued: ‘A Guardiola commitment in the summer would therefore be a surprise coup for FC Bayern.’