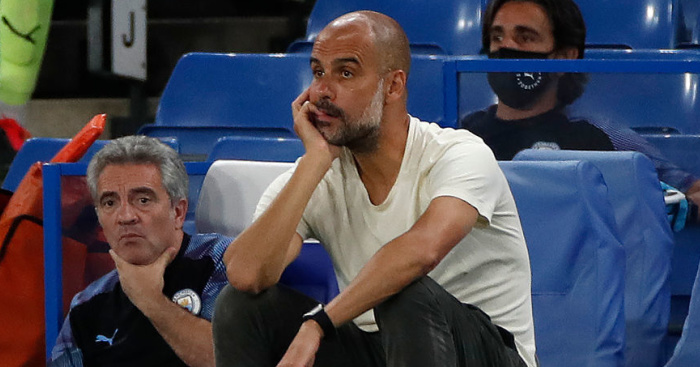 Pep Guardiola offered Liverpool his congratulations after their maiden Premier League title win, and pinpointed a difference in mentality as a decisive factor between the gap between the two teams.

On a pulsating night at Stamford Bridge, Liverpool were crowned Premier League champions after Man City succumbed to a 2-1 defeat at the hands of Chelsea

The defeat came much in part due to City’s own defensive frailties.

Both Chelsea goals were scored with a helping hand from the City team, and try as they might, their fearsome forward line could only put one past a determined Chelsea side.

Speaking in his post-match interview regarding the match, Guardiola said: “In terms of the game, we played good.

“Not a lot of pressure in the box. But we play in general a good game but our mistakes…

Regarding newly crowned champions Liverpool, Guardiola offered his congratulations, and pointed to a different mentality towards games as the difference between the two sides this year.

“Congratulations to Liverpool for this great season,” he added.

See how all the events from Stamford Bridge unfolded via the F365 score centre here.

“We still have five or six weeks to play but we won a lot in the last few years and of course we want to close the gap.

“After two seasons the gap is big. We were not consistent like the previous seasons.

“Liverpool won the Champions League and were given confidence. They played every game like it was their last game. In the beginning, we didn’t play like that way.

“We cannot forget we are still second in the league so we are better than a lot of the teams.”