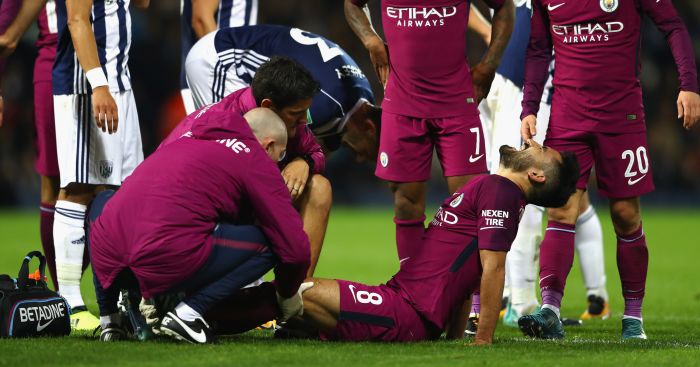 Forward Sane hit a double to give City a 2-1 Carabao Cup win at West Brom on Wednesday and book a fourth round home tie with Wolves.

But there were initial fears for Gundogan when he limped off following a challenge from Claudio Yacob on his first start since December after recovering from a serious knee injury.

Gundogan will have a scan on his left knee – the opposite one than he injured before – and was clearly in pain but Guardiola expects him back soon.

He said: “I think it’s not serious, it’s not eight months, but a little injury. Unfortunately the action is tough. He will be back soon hopefully.

“Tomorrow we will make a test. The physio and doctor told me it’s not big issue.

“I’ll have to review (Yacob’s tackle). It’s from behind but I don’t know if he touched the ball or not.

“I suffer for him. He was on the grass and at that moment you think the wrong situation. You can’t imagine, for eight months, to be fighting every day alone.”

Sane’s third-minute strike looked like opening the floodgates and starting a victory procession as City dominated the first half at The Hawthorns.

Yacob levelled with his first goal for four years with 18 minutes left but Sane won it five minutes later.

Guardiola added: “He played so well, not just in terms of goals – his second was fantastic – but how he kept the ball. He made a really good performance, not just the goals but in other issues he was outstanding.”

Guardiola was also delighted with a home tie after previously playing all of his League Cup games away.

He added: “Thank you so much to the guy who pick up the ball (in the draw). I don’t know who it was but I want to send him a barrel of good red wine.”

Albion’s Hal Robson-Kanu should have taken the tie to extra-time but hit the post in injury time with just Claudio Bravo to beat.

Boss Tony Pulis said: “Every centre forward will miss chances, even the best ones, from that position. I’m not going to be critical.

“We were creating opportunities against one of the top teams in Europe. They made a few changes but when you look at the changes it’s laughable really.”