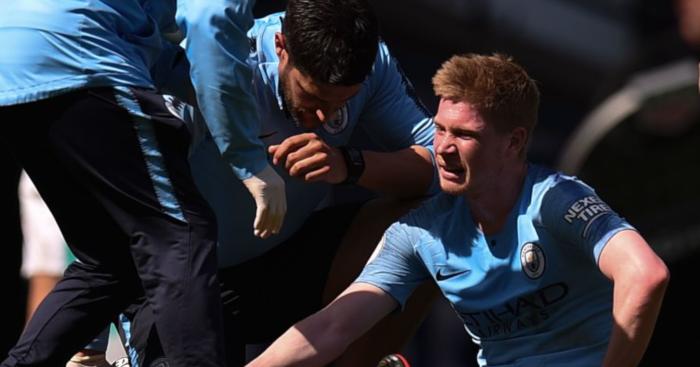 Manchester City manager Pep Guardiola is waiting to find out the severity of Kevin De Bruyne’s injury suffered in the 1-0 win over Tottenham.

The Belgium midfielder, only recently back from a knee problem, limped off in the first half at the Etihad Stadium as City returned to the top of the Premier League and gained revenge on Spurs following their Champions League exit in midweek.

Phil Foden, on just his second Premier League start, scored the only goal of the game just five minutes in.

The matches keep coming thick and fast for City, who head across Manchester to Old Trafford on Wednesday and Guardiola does not expect De Bruyne to be part of the squad for that game.

“I didn’t speak with him or the doctors. It is a muscular injury and I don’t know how big the impact is,” the Spaniard said.

“We will see tomorrow but I think the next game he will be out.

“I didn’t speak (to him). He put his hands in the hamstring position. Tomorrow we will know.”

City were unable to build on their perfect start and they allowed Spurs a number of chances, and on another day the Londoners could easily have taken a point.

It was an edgy second half but City ground it out to earn the three points and put the ball back in Liverpool’s court ahead of their visit to Cardiff on Sunday.

Guardiola accepted his side were playing “to lose the Premier League” and has hailed their achievement in the league this season.

“It was not our best performance comparing the other day but today they played with nothing to lose and we play to lose the Premier League,” he said.

“And after our defeat last Wednesday it was really tough, the last two days, but I like it being tough.

“We started incredibly well. Tottenham is an incredible team but we are there, with 86 points after 100 last season, it is one of the most remarkable things in my career.

“I want to win it, but I will not judge if not. Tottenham is going to finish top four with the games they have, three at home, so they didn’t have the pressure we had, so what we have done is massive.”

Tottenham, who sealed an away-goals victory over City in the Champions League after a 4-3 defeat on the night, again found holes in City’s defence, but were not clinical in front of goal.

Despite being third they have lost 12 games, but with three of their four remaining games at their new stadium, Mauricio Pochettino says his side are in charge of their own top-four destiny.

“It’s in our hands to be in the top four and be in the Champions League next season,” he said.

“Of course it’s going to be tough now because Tuesday we have a tough game, and Saturday, and the semi-final of the Champions League against Ajax.

“We know the circumstances and it will be very tough but I feel very proud.

“I feel the performance today was very good and at the least we deserved a draw. I think the man of the match was their goalkeeper Ederson.

“I think we competed really well in the circumstances and I am happy. We need to keep that feeling and translate it to Tuesday and be sure we can compete in our best way and be close to win, as three points will be decisive in our race for the top four come the end of the season.”