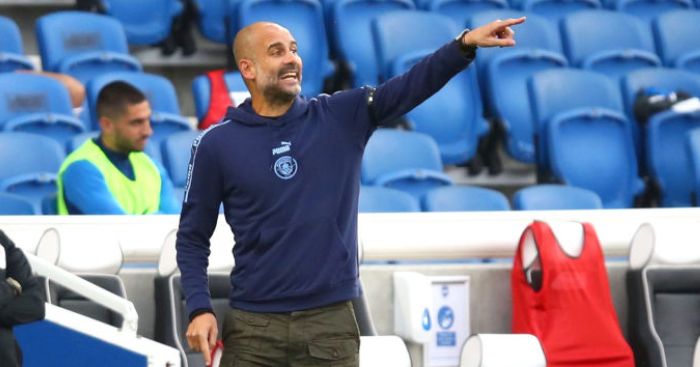 Pep Guardiola said that the levels Manchester City reached against Brighton showed why they deserve to be allowed into the Champions League.

City mathematically confirmed their place in the top four by thrashing Brighton 5-0. However, they have a two-season UEFA ban looming over them, which would prevent them playing in Europe’s elite competition next year if upheld.

The Court of Arbitration for Sport will announce their decision over City’s appeal on Monday, and their scintillating form against Brighton saw Guardiola maintain that his players do not deserve to be banned from the Champions League.

“I was pleased with everything tonight – the result and the levels we reached,” Guardiola told Sky Sports. “We are now at a good level and are ready to play the last games of the Premier League and in the Champions League.

“We’ve forgotten the Southampton result [a 1-0 defeat last Sunday] as we played incredibly well there. Football sometimes is strange. We just didn’t score there.

“We’re a team who create a lot of chances and today we converted them.

“We’ve qualified for the Champions League which was the minimum requirement for this club. And these players have done it for the last six or seven years.

“We won it on the pitch and hopefully on Monday UEFA will allow these players to play next season. They deserve to be in the Champions League.”

City were helped on their way to victory at Brighton by a Raheem Sterling hat-trick – even if the latter of those three goals was a little unorthodox.

Nonetheless, Guardiola believes the England winger is constantly improving at his finishing due to his work ethic in training.

“For a long time, he has been getting better,” Guardiola said. “His finishing, his shooting and that’s because he trains hard.

“It’s good for us to have him at the end of the season.”

City’s second goalscorer was Gabriel Jesus, who has bounced back into form this week. The Brazilian had previously not scored since February, but now has two goals in a week to his name after also netting against Newcastle.

Jesus also provided two assists, and Guardiola was keen to point out how big his contributions have been recently.

“He fought well. Before he scored, we had been delighted with his performances. Tonight he didn’t just get his goal, he made lots of good chances too. It’s unbelievable that he’s scored.”