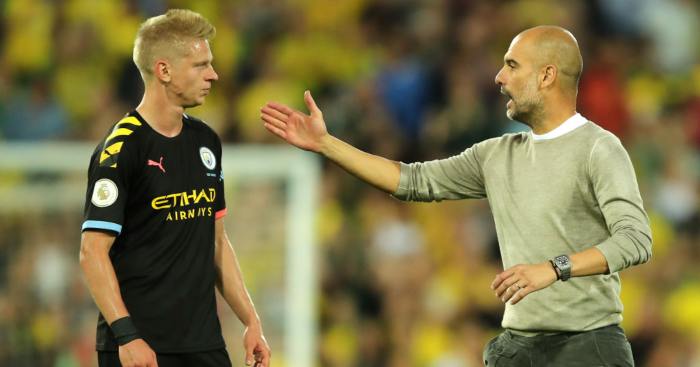 Oleksandr Zinchenko has hailed Pep Guardiola as the best in the world after the Manchester City boss reached a century of Premier League wins on Sunday.

Guardiola became the quickest manager to reach that landmark, in 134 matches, as City claimed a hard-fought and controversial 2-0 success over Sheffield United at the Etihad Stadium.

Goals from Sergio Aguero and Kevin De Bruyne in the second half saw the champions get back to winning ways after last Friday’s damaging loss at Wolves.

Many headlines focused on the officials after Blades forward Lys Mousset had a goal disallowed for offside by VAR and referee Chris Kavanagh unwittingly impeded a United player in the build-up to Aguero’s breakthrough goal.

But City left-back Zinchenko paid tribute to Guardiola, whose impact in English football over the past three-and-a-half years has been remarkable.

“It’s unbelievable,” said Zinchenko. “He’s the best in the world, no doubt.

“For me, the most important thing is he knows the right thing to say at the right time, and the team feels these type of moments. Of course, he is unbelievable with tactics.”

City needed to pick themselves up after the reverse at Molineux which, in all likelihood, ended any lingering hopes of retaining the title. Even after the victory, City still trail leaders Liverpool by 14 points having played a game more.

Ukraine international Zinchenko said: “Wolves was a tough game, unbelievably tough. During the game we were playing 10 against 11 and a lot of guys spent a lot of powers. It was so difficult.

“But here we got the three points and that is the most important thing. It is not always easy to play against these kind of teams when they play in this kind of way, but we did it.

“Of course it’s a massive gap but every single game we have to show our class, and then in the end of the season we are going to see what happens, because everything is possible in this kind of league.”

Zinchenko did not have an opinion on the game’s main talking point of the moment, VAR.

He said: “My opinion is that we have to accept it, that’s it, and play our game.

“What can we do? If I was to say, ‘I don’t like VAR’, nothing will change. You just have to accept it, keep your mouth closed and play.”

City play their third game in six days when they host Everton on New Year’s Day. Zinchenko, as an Orthodox Christian, says playing so many games over the festive period does not bother him.

“I don’t celebrate Christmas in this kind of time,” he said. “My Christmas is January 7, so I don’t mind it.”

How he feels about playing the Carabao Cup semi-final first leg against Manchester United on January 7 he did not mention.

Things do not get easier for Sheffield United as they head to Liverpool on January 2, but manager Chris Wilder will take plenty of positives forward after what was a first away defeat since January.

He said: “If it was going to go, that unbeaten record, I don’t mind it going in the manner that it did.

“My team has got heart and spirit and we pushed regardless of Man City’s position.

“The team selection was a strong one, we went toe to toe with them. Did we have the majority of possession? No, but were we hard to beat? Yes. Did we cause a threat? Most certainly. On another day we might have got something.”