Claudio Bravo limped off the pitch in Chile's draw with Colombia on Thursday evening. 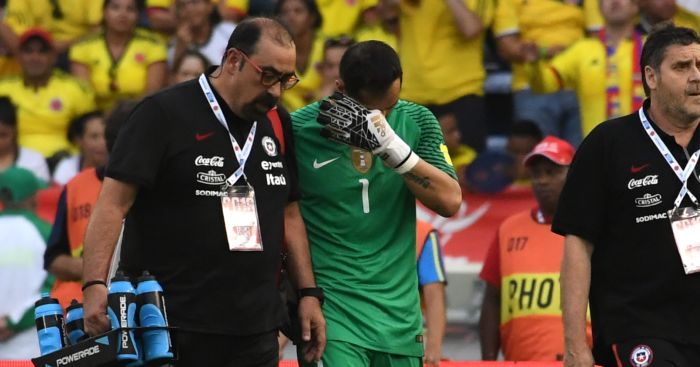 Manchester City boss Pep Guardiola has been given an injury scare as keeper Claudio Bravo limped off the pitch in Chile’s draw with Colombia on Thursday evening.

Bravo joined City from Barcelona this summer for £17.1million as a replacement for Joe Hart, who went on loan to Serie A side Torino after being frozen out by the new boss.

The 33-year-old was replaced in the 64th-minute against Colombia by Johnny Herrera after he appeared to injure his right knee while trying to save the ball.

Bravo collided awkwardly with an onrushing Colombian full-back after diving in to clear the ball away for Chile.

The brave keeper looked in some discomfort as he walked to the bench and Guardiola will be hoping the injury isn’t serious with Willy Cabellero his only senior back-up.

Chile are in fifth place in the South American World Cup qualifying group after the goalless draw, one point behind Colombia in third.