Home All The News Guardiola: We showed today why we are champions 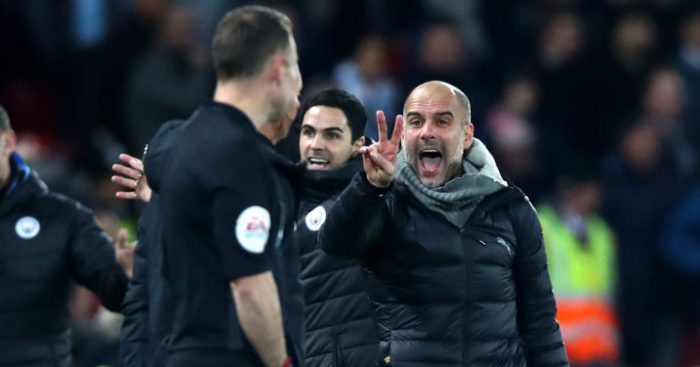 Pep Guardiola thinks Manchester City’s performance showed why they are currently Premier League champions in their 3-1 defeat to Liverpool on Sunday.

Leicester, eight points behind, are now Liverpool’s closest challengers after City‘s miserable run at Anfield – one win in 29 visits – continued in a match which left Guardiola raging at some controversial VAR calls.

Fabinho could not have timed his first goal since December any better with the sixth-minute opener, with City still arguing for a handball by Trent Alexander-Arnold in the other penalty area, and Mohamed Salah and Sadio Mane put the game out of sight before a late consolation for Bernardo Silva.

“What happened today we showed why we are champions, I am so proud of my team, more than ever,” Guardiola told Sky Sports.

“We can be proud of how we played against the strongest team in Europe.

“Ask to the referees, don’t ask me. Ask to Mike Riley and the guys in VAR. I would like to talk about our performance, it was so good. It was one of the best performances we have played.

“We played like back-to-back champions. We cannot deny how good Liverpool are but the way we played, the personality, it was good.

“It was quite similar to the Champions League game. It was an incredible situations in that game too but the performance today was so good. Always we try, never give up that is why we are back-to-back champions. Always fight until the end.

“It is important to grow as a club and as a team. It was an honour for both team to show Premier League to spectators this type of game.”