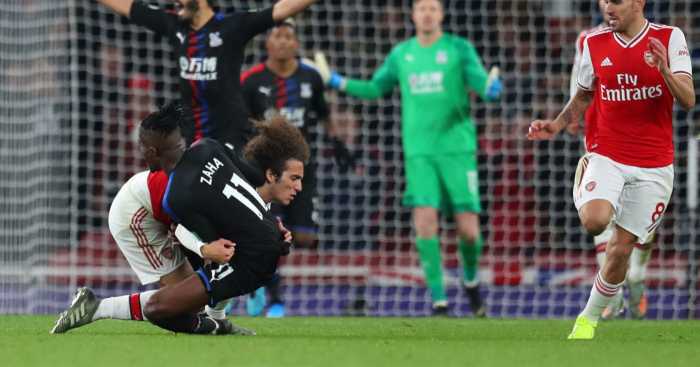 Gary Cahill believes Crystal Palace could have left Arsenal with a sensational three points were it not for a “rugby tackle” on Wilfried Zaha.

The winger was flying forward on the counter-attack in the closing stages of Sunday’s 2-2 Premier League draw only to be taken out, almost spear-like, by Gunners midfielder Matteo Guendouzi.

The visitors had already shocked the Emirates Stadium by recovering from two goals down after Sokratis Papastathopoulos and David Luiz had struck inside 106 seconds.

Luka Milivojevic pulled one back from the spot after the Video Assistant Referee overturned Martin Atkinson’s decision to book Zaha for diving, with Jordan Ayew’s second-half header earning the Eagles a point.

The game will be remembered for Arsenal captain Granit Xhaka’s extraordinary outburst as he swore at home fans who greeted his substitution with cheers.

Although he would not be drawn on that particular incident, Cahill insisted a late Sokratis strike was correctly ruled out by VAR before Zaha was stopped in unorthodox fashion – with the winger himself comparing the challenge to something found in the NFL.

“I think the lads were definitely adamant there was something at the near-post and I think that is where VAR is very good,” he said.

“Because when there are a lot of bodies in the box and there is a big incident like that it was easily missed back in the day so that is where VAR comes in and is very good because that is a huge moment – to go 3-2 down with five minutes to go it would be very difficult for us to come back.

“They are big moments and I think the right decision was given and we could have nicked it at the end with the obvious rugby tackle on the half-way line which was a professional foul but if Wilf skips away from there then who knows what happens at the end?”

Cahill also admitted the Palace players smelt blood as soon as Milivojevic had halved the arrears as the atmosphere inside the stadium changed almost instantly.

“It is about character and personality,” the former Chelsea defender said.

“That is a big moment, to go two down early on and come back. As soon as we got the first one, I knew it was game on and thankfully we ended up at the end nicking a point.

“I have been there myself in moments when things have not been going great. Big clubs’ fans expect result after result and for us to come here, they started well and it settled the crowd down but then it was for us to react, turnaround and not accept that we are going to roll over.

“We hit them on the break a few times and in the end we took a point which, given the tough run of games we’ve got, is a very good point.”