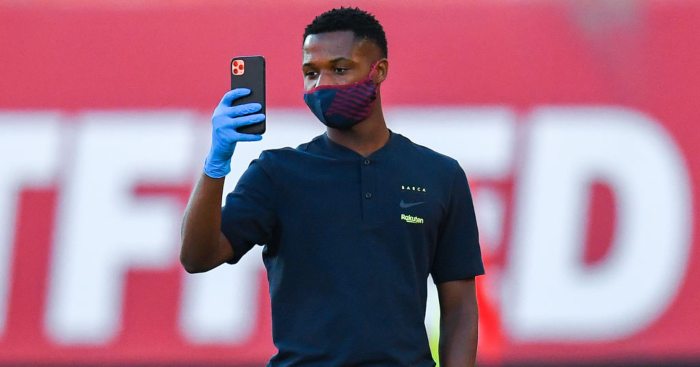 The Red Devils boss Ole Gunnar Solskjaer is keen to add another attacker to his squad as part of his Old Trafford rebuild.

While Jadon Sancho is their prime target, reports recently said Man Utd had also made Fati a top consideration.

Fati is a forward United tried to lure away from Barca as a 16-year-old in their Academy last season. Their scouts saw something to catch their eye and they were not wrong because the youngster’s progression in the last 12 months has been immense.

Last July he agreed a contract until 2022 and a month later he has made his first-team debut. And now Fati has scored five goals in 20 La Liga and Champions League appearances.

No wonder United recently submitted a €100million bid for the 17-year-old Spain U21 international, according to Sport.

However, talk of a huge approach from Man Utd was quickly denied by Barcelona director Xavier Vilajoana.

“For us, there’s no story with Ansu, we have never spoken about selling him,” Vilajoana said.

“We won’t use players from the academy to make cash.

“In principle, we have no intention of selling the players we believe will make the first team.

Despite that, The Times then claimed this week Man Utd had increased their offer for the player. The second approach was said to be €100m up front with a further €50m in incentives.

However, Balague has ruled out talk that Man Utd have made an offer. And the Spanish football expert also believes United are being used by one of the game’s top agents.

Balague tweeted: “United never made an offer [for Fati]. [Agent] Jorge Mendes talked to Barcelona before the pandemic about possible interest, but club told him he’s not for sale.

“I feel Mendes is trying to convince the player he should be his agent. At the moment, Fati’s father is advised by Rodrigo Messi.”

Ansu Fati with the only goal #BarcaLeganes

On Ansu: United never made an offer. J. Mendes talked to #FCB before pandemic about possible interest, club told him not for sale. I feel Mendes trying to convince player he should be his agent. ATM his dad is advised by Rodrigo Messi pic.twitter.com/AnG9aqHuW0

And in a follow-up tweet, Balague confirmed he felt Man Utd were being used.

“The English club say they are being used by Barcelona and Jorge Mendes as they have no interest in the player.”

More from Ansu Fati and his link to #MUFC. The English club say they are being used by #FCB and Jorge Mendes as they have no interest in the player

Fati has been fast-tracked into the Barca first team this season, making 25 appearances. The 17-year-old was also on target last night as Barcelona overcame Leganes to extend their lead at the top.

He also became the club’s youngest ever goalscorer and is highly-regarded by Lionel Messi. In fact, the Barca board even see Fati as the man most likely to step into his shoes in the long term.