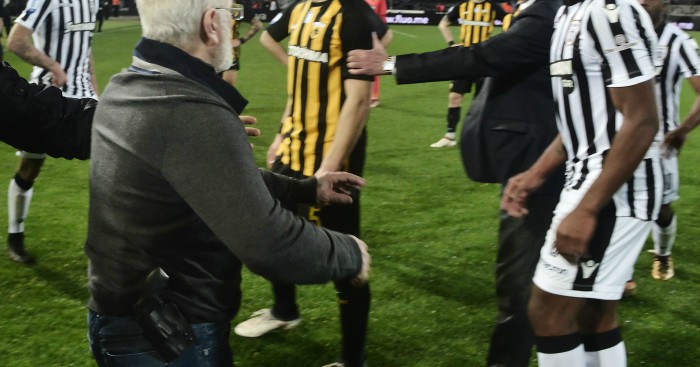 PAOK Salonika president Ivan Savvidis has apologised for storming the pitch during Sunday’s clash with AEK Athens while appearing to carry a gun in a hip holster.

The Greek Superleague contest descended into chaos when, with the score 0-0, PAOK had an 89th-minute goal ruled out for offside.

Savvidis marched onto the pitch in protest and had to be restrained as he vented his fury, with images seeming to show there was a firearm attached to a holster on his hip.

The game was eventually abandoned and the Superleague has since been suspended indefinitely by the country’s government.

In a statement published on PAOK’s official website, Savvidis said: “I wish to apologise to all PAOK supporters, Greek fans and the international football community.

“I am deeply sorry for what happened. I had absolutely no right to enter the pitch the way I did.

“My emotional reaction stems from the widespread negative situations prevailing in Greek football lately and from all the unacceptable, non sports-related events that took place towards the end of the PAOK-AEK Athens encounter: the actions of the referee and his assistant, the match suspension, the protests and invasion on the pitch by many people from both sides.

“All that could lead to uncontrollable situations. My only aim was to protect tens of thousands of PAOK fans from provocation, riots and human casualties.

“Please believe that I had no intention to engage in a brawl with our opponents or the referees. And ? obviously did not threaten anybody.

“Unfortunately, my family and I, as well as my colleagues, have been taken hostage by a totally sick football status-quo.

“Despite the non-stop attacks I am facing on all fronts, I fight and I will continue to fight for fair football, equitable refereeing in all encounters and titles being won on the pitch and not in courtrooms.

More from Planet Sport: Top 10 tennis stadiums in the world by capacity (Tennis365).