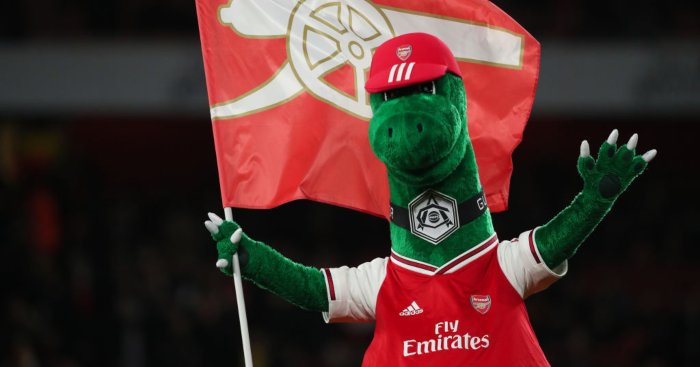 Arsenal mascot Gunnersaurus is set to continue in his matchday and community roles once the coronavirus pandemic allows supporters back inside the Emirates Stadium.

Contrary to a number of reports, the PA news agency understands the dinosaur mascot will still entertain fans upon their return – although it is currently unclear who will be under the costume.

Jerry Quy has portrayed Gunnersaurus for the past 27 years but was made redundant as part of the job-cutting scheme implemented by Arsenal in the summer.

The club announced in August that they planned to make 55 roles redundant due to the financial ramifications of the Covid-19 outbreak, with Quy losing his job as a supporter liaison for away matches.

“Our aim has been to protect the jobs and base salaries of our people for as long as we possibly can. Unfortunately, we have now come to the point where we are proposing 55 redundancies,” the club said in a statement released on August 5.

With games being played behind closed doors since Project Restart in mid-June, a small number of supporters were supposed to have been returning to Premier League games last weekend.

Arsenal had been planning to welcome a select number back for Sunday’s 2-1 win over Sheffield United – but a change in Government guidelines means the return of supporters has been delayed indefinitely.

Gunnersaurus has therefore not been required at Arsenal home games, with Quy’s former role on away trips also currently not needed.

Discussions on whether he continues to don the Gunnersaurus costume moving forward have not yet concluded.

But the Gunnersaurus gimmick will live on, even if a new employee takes on the role from Quy.

On Monday a GoFundMe page for was set up by George Allen and has already raised almost £9,000 – a statement on the page read: “Gunnersaurus has been the Arsenal club mascot for 27 years. He’s a club icon and we cannot let him become extinct.”