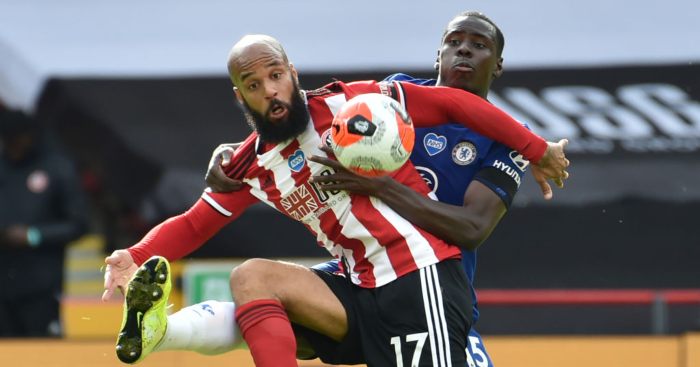 Gus Poyet thinks Chelsea defender Kurt Zouma was too “static in everything” he did during their loss against Sheffield United on Saturday.

The Blues began the day on Saturday in third place in pursuit of a Champions League place, but could now fall to fourth if Manchester United win their match against Southampton tonight.

David McGoldrick scored his first Premier League goal to give the Blades the lead and pounced again in the second half to seal a stunning victory after Oli McBurnie’s fine header had given them a 2-0 half-time lead.

Zouma played the full 90 minutes for Chelsea as their defence let them down against a rampant Sheff Utd side and Poyet thinks he particularly let them down for the Blades final goal.

“We are all different, that’s the good thing about football, we all train in a different way, we all think in a different away,” Poyet told Stadium Astro. “For example, myself, even if I like my team to treat the football very well, and pay attention and create attacks, I start my team from the back.

“I make sure that first we are organised, we are tight, we make it difficult for the opposition, we care about not conceding, like our goal is our house, they cannot get in there.

“Sometimes we try to split, he’s a offensive manager, he’s a defensive manager, and there’s nothing in between, but there is. The best teams in the world defend very well and attack very well.

“It’s having the right balance and that’s what I want to see from Chelsea next year – a better balance in their play. More practical sometimes, win 1-0, why not?

“I would start with that, to have a better organisation in terms of defending. I’m not going to take out Zouma because he’s a very strong defender. Without going too far, the tackle the other day against Crystal Palace in the last minute, there are not many players who can do that.

“But today he was static. He was static in everything. Even in the last goal which everyone will remember for [Antonio] Rudiger not kicking the ball away but he [Zouma] doesn’t even try to stop the cross.

“In football I say a team can carry one player in a game, two players [more difficult], more than two you can’t carry because the opposition can play. And that’s what happened to Chelsea today, there were too many who were not at the level you need to be to win football games.”