Home Newcastle United News Gutierrez: Newcastle ‘froze me out’ due to cancer 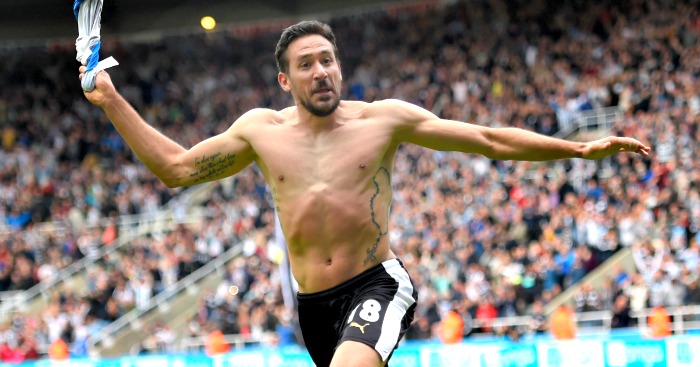 Jonas Gutierrez claims that he was “frozen out” by Newcastle because of concerns over his fitness following a battle with cancer.

In a statement to an employment tribunal hearing his claim for disability discrimination, the 32-year-old also accused Newcastle of ensuring he did not make enough appearances to trigger a one-year contract extension.

Gutierrez, currently playing for Spanish side Deportivo La Coruna, spent seven seasons with Newcastle after joining the club in 2008, and underwent an operation to remove a tumour in his left testicle in October 2013.

In his statement to the tribunal, the midfielder said he was called into then manager Alan Pardew’s office in early December 2013 – when he felt he was returning to full fitness – to be told that he did not feature in Newcastle’s future plans, and was free to agree terms with another club.

Describing the meeting, Gutierrez said: “This was the first time I – or any of my representatives – had been notified of this and it came as a great shock, so soon after my cancer treatment.

“I was very shocked by the club’s sudden change of heart about me, particularly as I had played in 194 games for the club at this point and was one of the key first team players.”

Pointing out that the decision was taken when he still had 19 months remaining on his contract, Gutierrez added: “I believe that the reason for this was due to my cancer diagnosis and very recent operation to remove the tumour.

“I think they feared my illness would mean that I could no longer play at the highest level and they considered me to be a liability rather than an asset to the club.

“I got the impression that they thought I couldn’t be the same player again after such an illness or that I would be bound to have lingering effects, other episodes of illness off the back of it.

“This caused me a lot of distress, given my hard work and commitment for the club in the preceding five and a half years.”

Gutierrez, who earned around £40,000-a-week during his time with Newcastle, is reported to be seeking a payment of around £2million after missing out on an “automatic” 12-month extension to a four-year contract, which would have kicked in if he had started 80 games between 2011 and 2015.

The player, who in fact made 78 starts and five appearances as a substitute, said in his statement: “It is notable that during my chemotherapy treatment, neither the manager, Alan Pardew, or any club directors contacted me to see how I was feeling or to congratulate me on my recovery.

“Shortly after my return to the club from chemotherapy, I was called into Mr Pardew’s office.

“Mr Pardew apologised for the way he had treated me in December 2013, when he told me I was not wanted by the club any longer but he said that this was not his decision.

“I understood by this that the decision was actually that of the club’s owner, Mike Ashley.”

In his evidence, Gutierrez said he had agreed to “draw a line under the past” with Pardew, but the manager moved to Crystal Palace within a month of the conversation.