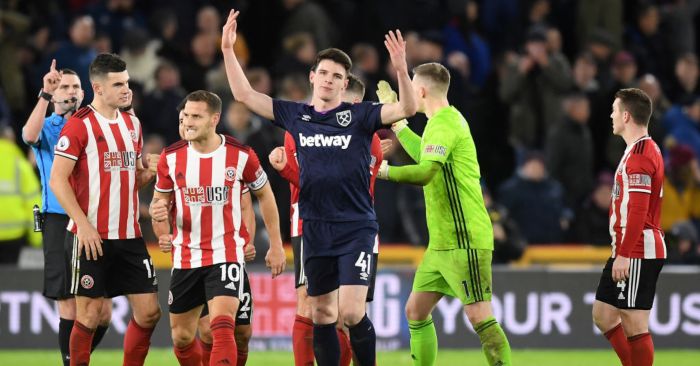 Robert Snodgrass seemed to have salvaged a point for the visitors with a stoppage-time goal but an unintentional (and unavoidable) handball from Rice was spotted in the build-up, and the goal subsequently disallowed.

Rice was devastated after the game, claiming to share “the thoughts of every Premier League player”.

totally agree carra. He’s headed the ball onto my arm?! where am I supposed to put it if I’m in a running motion? Really don’t get it, gutted. https://t.co/OIsTZ0Ju0R

“I just can’t get over it. I’ve not intentionally meant to handball the ball,” said the England international, before delivering a withering assessment of VAR.

“I don’t think it’s just me, I think it’s the thoughts of every Premier League player – I don’t think pretty much anyone wants to have VAR in the game,” he added on Sky Sports.

“There have been so many decisions this season that have been absolutely crazy.

“They (Sheffield United) are celebrating VAR like it’s a goal, football shouldn’t be like that. The emotion there the West Ham fans showed when we’ve equalised late, that’s real emotion. They’re celebrating VAR.”