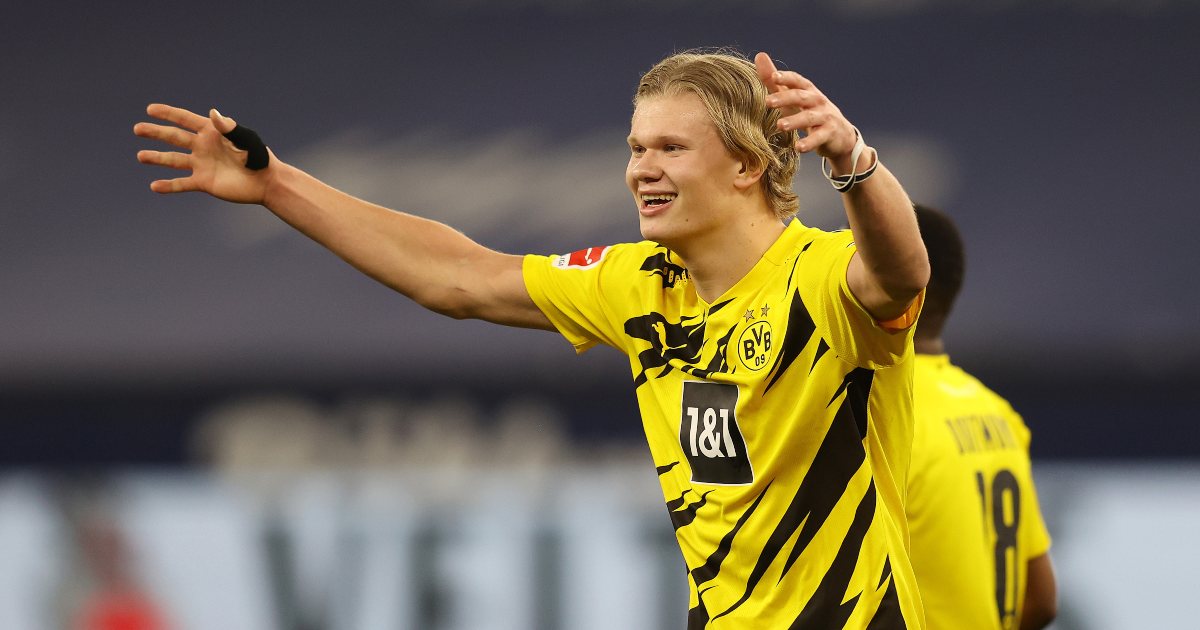 Haal or nothing
Well this is sweet.

‘OLE GUNNAR SOLSKJAER has not ruled out a new bid to land superstar Erling Haaland’ – Neil Custis, The Sun.

Solskjaer has also not ruled out a bid for Lionel Messi, Kylian Mbappe, Pele or Diego Maradona (you never know) and that is exactly as relevant and newsworthy as the manager of Manchester United ‘not ruling out’ a bid for one of the world’s greatest young footballers.

Let’s get this straight, it’s not Solskjaer who will be doing the ‘ruling out’ in this potential transfer.

There is no universe in which it is Solskjaer who decides that Europa League team and serial semi-finalists Manchester United are not interested in 30-goals-in-32-Bundesliga-games Haaland. There is no scenario in which Solskjaer decides he does not need 2021’s hottest young player, thank you very much, because he already has Anthony Martial.

Not only does Custis write breathlessly that a middling football manager is not ruling out a bid for a phenomenal striker, he also entirely gets the story arse about face.

‘But the door is not closed, with a £65m bid this summer enough to trigger his release clause.’

After all, who knows that Haaland’s £65m release clause does not come into play until 2022 except, well, everyone else in the whole football world not called Neil Custis?

They certainly know at The Sun, as evidenced just two days ago when Custis’ colleague Martin Blackburn wrote:

‘Both Manchester clubs,Chelsea and Liverpool have all been linked with the Norwegian hotshot who is likely to cost more than £100million this summer.’

If Custis missed that particular article, maybe he should have seen this headline – on The Sun website – also two days ago:

The clues were there if he chose to look beyond the end of his nose.

The same website almost seems to be trolling their Manchester United correspondent with this story published on Thursday morning, hours after the newspaper hit the shelves containing Custis’ misinformation:

‘MANCHESTER UNITED have reportedly been told that they can sign Erling Haaland this summer, but only for £150million.’

Ouch. Does anything hurt more than being corrected by an ‘according to the Star’ copy-and-paste chop job from your own colleagues?

We are told that ‘KYLIAN MBAPPE is officially the most-valuable player in the world – with Erling Haaland bizarrely not even in the top ten’, which leave us wondering who the f*** decided that KPMG were responsible for ‘official’ player valuations? Who decided that ‘KPMG proprietary algorithms’ were the algorithms of record?

Oh and Haaland is ‘bizarrely not even in the top ten’ because the algorithms were last run about three weeks ago, at which point KPMG explained that the Norwegian ‘had a tough start into 2021 with Borussia Dortmund’, which of course saw his value plummet because that’s exactly how player valuations should work. Since then he has scored five goals in four games so we think he might be doing alright in 2021 after all.

And if you really think you can ‘officially’ get Haaland for just £95m this summer, then you are the second-most deluded man who works for The Sun.

In the last two days alone, they have brought us these three headlines:

The first two stories are taken from exactly the same source: A piece of fluff in BILD that assigns a percentage to the likelihood of various things happening with Klopp over the next two years.

‘Publication BILD claims there is a 68 per cent chance that Klopp could walk away from the Reds in the summer and replace Joachim Low as manager of the Germany national team, following the 2022 World Cup.’

That they’re talking about the summer of 2022 seems quite important here, but that’s not quite clear as the Mirror are more than happy to make Liverpool fans think that they are mere months away from losing their manager.

And what is the ‘headache’ at Liverpool that gives Klopp an incentive to leave? Coronavirus, of course. Well, it did stop him attending the funeral of his mother so that seems perfectly normal. Quite why that would make him leave Liverpool way ahead of schedule is unclear but clearly unimportant in the quest for Liverpool fear clicks.

And who has used the words ‘natural replacement’, quoted in that headline with quote marks which are traditionally used to indicate quotes? Nobody. Nobody at all. Those quotes literally never appear in the story.

There is a link to another story – headlined ‘Jurgen Klopp’s ‘natural successor’ could be following the same path to Liverpool’ – and somewhere along the way, it has been decided that ‘replacement’ sounds a little more immediate than ‘successor’, which suggests that the current Liverpool manager might remain in post for a while yet. And we simply can’t have that, can we?

Recommended reading of the day
Sid Lowe on Aldridge, Richardson and Atkinson at Real Sociedad

James Dale on the decline of Birmingham City