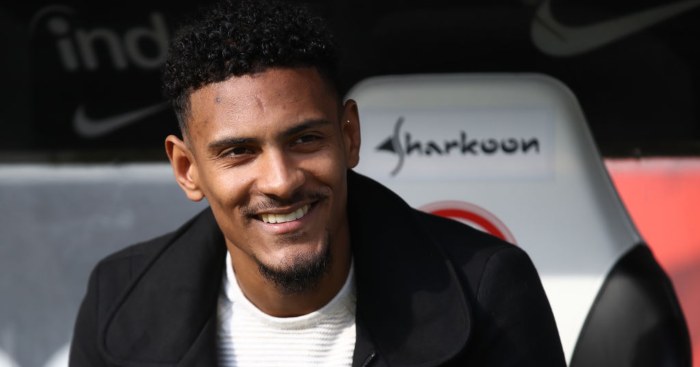 Eintracht Frankfurt striker Sebastien Haller is en route to London to undergo a medical ahead of a proposed move to West Ham, the Bundesliga club has announced.

The 25-year-old scored 20 goals in 41 appearances last season and now looks set to join the Hammers.

A former France Under-21 international who came through the ranks at Auxerre, West Ham are reportedly ready to spend £45million on the forward – a fee which would break their transfer record.

Eintracht confirmed the news on their Twitter feed on Tuesday morning, posting: “Eintracht and @WestHamUtd have agreed terms for the transfer of @HallerSeb.

“Haller has now been cleared to undergo a medical in London. If all goes to plan then Haller will sign with the Hammers #SGE.”

Eintracht and @WestHamUtd have agreed terms for the transfer of @HallerSeb. Haller has now been cleared to undergo a medical in London. If all goes to plan then Haller will sign with the Hammers. #SGE pic.twitter.com/VpQNxM4y0I

Haller played 75 times for Frankfurt across his two seasons at the club, amassing 32 goals.

He enjoyed a similarly fruitful scoring spell at his previous club FC Utrecht where he found the back of the net 51 times in 98 games for the Dutch side.

Haller, who scored the opening penalty in Eintracht’s Europa League semi-final shoot-out defeat to Chelsea last season, now appears to be on course to complete a move to the London Stadium.

West Ham boss Manuel Pellegrini admitted the club need to bolster their attacking options before the start of the new season.

“It’s normal in this part of the season that some players must leave the club and others will arrive,” he told whufc.com.

“It’s true we have three strikers less because Lucas Perez, Marko Arnautovic and Andy Carroll are not here, but we are trying to bring in good players and I am sure we are going to improve our squad and we hope to improve on last season.”

If the deal goes through, Haller would join Spain international midfielder Pablo Fornals and goalkeeping duo Roberto and David Martin in signing for West Ham this summer.

It was confirmed on Tuesday that full-back Sam Byram had been sold to newly-promoted Norwich, while fellow defender Pablo Zabaleta confirmed the upcoming season would be his last in England.