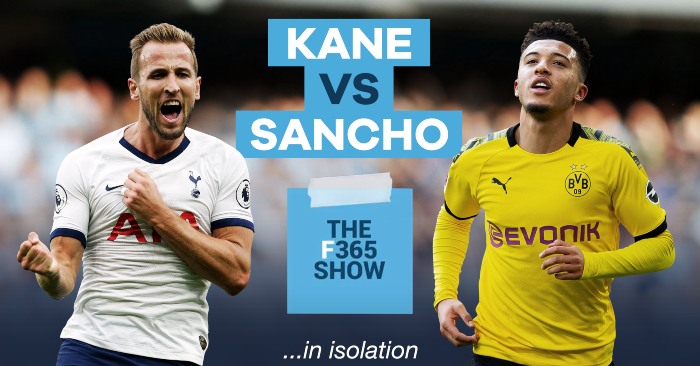 The F365 Isolation Show goes all ‘would you rather?’ with a Harry Kane v Jadon Sancho conundrum for Man Utd. Come and join us.

It’s the age-old question: do you spend £200m on Harry Kane or about half that on Jadon Sancho during a global pandemic that could cripple finances in every industry and transform football forever?

Such a relatable question came from the single greatest Yeboah in history: the Mailbox’s own Professor David Achanfuo of Australia.

And it turns out that Winty agrees with our esteemed academic in that Manchester United, if given the choice, have to go for Sancho.

The idea that Kane has peaked is even suggested, with consternation at the fact that Michael Owen was only 26, not in his early 30s, when he joined Newcastle.

The high-brow discussion does not end there. Other topics include whether Tanguy Ndombele is a strange shape, as well as difficult first seasons suffered by eventual Premier League greats. Will Adel Taarabt MkII soon be included among them? Absolutely not. But still.

So join editor Sarah Winterburn, host Mark Smith and host Mark Smith’s impressive hair, give us a subscribe and a Brendan Rodgers-style thumbs-up, and waste spend about 20 minutes of your life wisely by watching the latest Football365 Isolation Show.