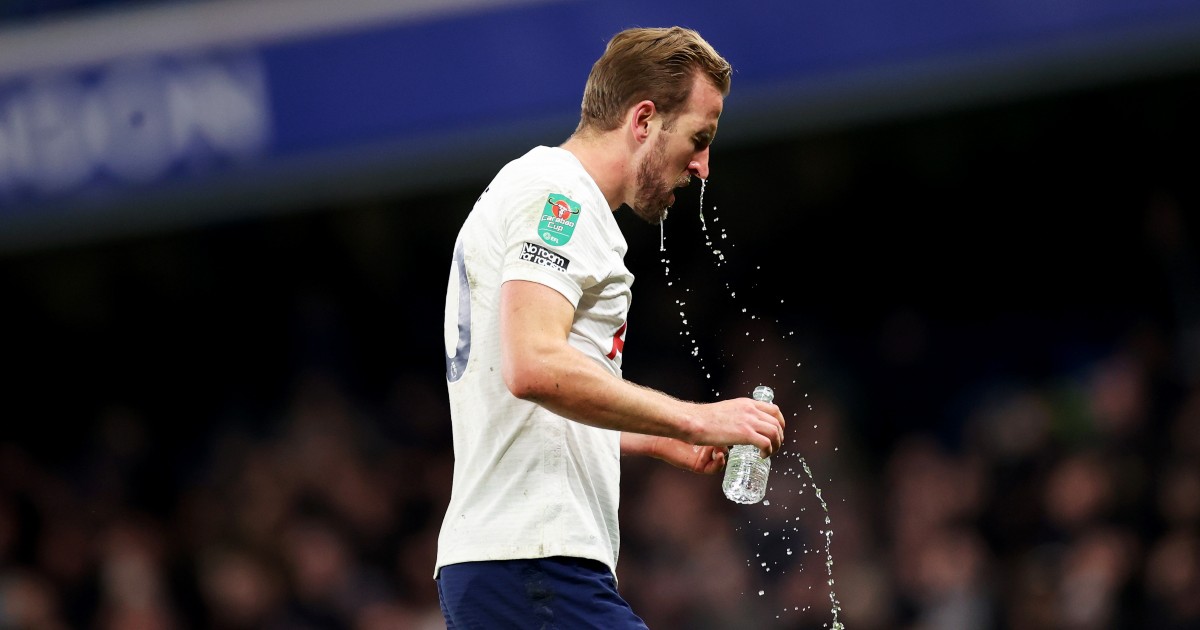 00000Harry Kane has an atrocious record in semis and finals and Tottenham will need him to overcome that in search of unlikely Carabao Cup glory.

Spurs made tough work of League One opposition to reach the 2015 League Cup final, dispatching Nigel Clough’s Blades with the help of an Andros Townsend penalty and Christian Eriksen’s second-leg heroics. The Dane cancelled out a Che Adams double with a sensational first-half free-kick and a clever finish from Harry Kane’s lovely through ball at Bramall Lane. Benjamin Stambouli finished the game. Kane had eight shots in that second leg. 2015 Harry Kane was the most pure version of Harry Kane possible.

Having beaten Chelsea 5-3 in a White Hart Lane thriller on New Year’s Day, Spurs went into the 2015 League Cup final two months later with fresh belief that they could overcome the dominant Premier League leaders. Kane won a free-kick that Eriksen rattled against the Wembley crossbar after ten minutes, with further chances falling to Nacer Chadli and Ryan Mason. But they were soon Jose Mourinho’d by goals late in the first half and early in the second, both deflected, scored by John Terry and Diego Costa. Terry’s strike went in off Kane last; he said post-match that “it’s the worst feeling in the world, losing, and losing in a final on the big stage even worse”.

Two years later, the same opponent haunted Spurs at the same stadium. Chelsea were once again Premier League champions in the making and while Pochettino had overseen an undoubted improvement, Antonio Conte’s monstrous Blues were not for stopping. Kane equalised with a glorious 18th-minute header after Willian’s free-kick opened the scoring. The Brazilian netted again, only for Dele Alli to respond. But an Eden Hazard-inspired late blitz sent Chelsea to the final as Spurs fell short again. Heung-min Son at left wing-back was a choice.

Back when Phil Jones wasn’t patted on the head for making basic defensive actions, as if he isn’t a dedicated and very good professional footballer at the absolute highest level, he was busy going through that rite of passage for any centre-half worth their salt: shackling a half-fit Kane in an important cup game. The Spurs striker rushed back from an ankle injury to be captain for 90 minutes in a disappointing defeat to Manchester United. Alli gave Pochettino’s side an early lead but Alexis Sanchez and Ander Herrera pegged them back to send Mourinho through again.

There had been some inevitable concern over Kane’s fitness heading into the World Cup, rather undermined by six goals in eight Premier League games in April and May, then another half-dozen at the tournament itself. Things slowed from the quarter-final onwards, however, as England made it past Sweden without their talisman scoring, then ran out of steam against Croatia before the dud of a third-place play-off with Belgium. Kane looked frankly knackered in that semi-final, emphasised best by that first-half chance at 1-0: Kane hit it straight at Danijel Subasic, should have squared it to Raheem Sterling and was offside anyway. Perfect hat-trick, that.

Another ankle ligament injury stunted Kane’s progress during the 2018/19 season, although he did still manage 24 goals in 40 club appearances. Among those was a penalty the striker won from and converted past Kepa Arrizabalaga in the 26th minute of a first-leg win. With Kane out of the return at Stamford Bridge, Spurs soon allowed their grip on the tie to slip. N’Golo Kante and Hazard cancelled out their advantage within 40 minutes of the second leg and while Fernando Llorente sent the game to extra-time and penalties as Kane’s replacement, Eric Dier and Lucas Moura erred from the spot in an agonising shootout.

Kane managed to recover from that ankle problem and sustain another in the time Spurs made it through to the latter stages of another knockout competition. The inverse of the League Cup run happened as Kane missed the entirety of the Champions League semi-final drama against Ajax before starting the final – his first appearance in 53 days. There was no semblance of surprise as Kane awkwardly and aimlessly stumbled around the Wanda Metropolitano, managing 26 touches in 90 laboured minutes. Pochettino might forever ponder the decision to play him instead of Lucas, although Liverpool led from the 106th second and the choice of centre-forward probably wouldn’t ever have changed that.

There’s a pattern in the big games.

Given the chance to really stretch his legs and inspire Spurs to the brink of shiny glory, Kane could not put Championship side Brentford to the sword in that most seemingly impossible of games: a one-legged Carabao Cup semi-final. The hosts never looked truly comfortable, not least a forward who was kept quiet by Mads Sorensen and Ethan Pinnock.

Mourinho was the mastermind behind that underdog victory but the Portuguese was not allowed to enjoy the fruit of his labours. That honour was instead bestowed upon Mason, who quickly acclimatised to the role by conceding that he was “not sure” whether the injured Kane would be fit to feature in the final. The jury remained very much out during a 90-minute display that produced no shots, no key passes and, perhaps the best indication of an off-colour Harry, no fouls.

It took time for those gears to start whirring at Euro 2020 but Kane soon started to motor, reaching the point where he felt confident enough to purposely miss an extra-time semi-final spot-kick against Denmark so he could score the rebound and ensure all of his tournament goals were non-penalties. He was excellent in the best semi or final performance of his career thus far.

But Giorgio Chiellini and Leonardo Bonucci soon had a word. Kane was thoroughly restrained in the final, dropping increasingly deeper in search of purpose and meaning. The captain did take a hell of a penalty in the shootout, later mourning a defeat “that will stay with me for the rest of my career”.

For someone who claims to be desperate to win things, Harry Kane sure likes playing as if he's hungover in big cup games for Spurs. We've been horrible, true, but his movement and effort is non-existent. #thfc