Harry Maguire and Lionel Messi dominate the media and so Mediawatch. 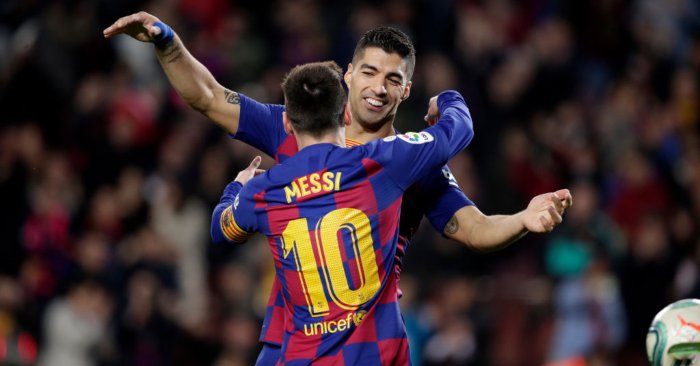 Raheem the dream
Tuesday brought a ‘Covid-19 crisis‘, according to the actual front page of The Sun, when the big story was that Raheem Sterling had been at a party in Jamaica with Usain Bolt. Later that same day, Sterling tested negative for Covid-19 so ‘crisis’ averted. Phew.

On Thursday, The Sun are reporting that England stars Mason Mount and Tammy Abraham are both in quarantine – along with two other Chelsea players who have holidayed in Mykonos – after a spate of positive tests at the club.

How utterly bizarre that there is no mention of this on the front page.

Clear and present danger
The headline in The Sun is simply brilliant.

Note the quote marks. Because he has not been ‘cleared’ at all; he has just been given the right to appeal, which in Greek law automatically ‘nullifies’ the original verdict.

We particularly enjoyed this sentence:

‘Phone footage which showed Maguire’s pals confronting two Albanians who allegedly tried to inject his sister Daisy, 20, with a drug was also not allowed to be submitted.’

Firstly because they are no longer writing that these men ‘looked’ or ‘sounded’ Albanian; now they are simply Albanian. Presumably because Harry Maguire once saw Lorik Cana on Match of the Day and these mystery men were similarly swarthy.

And secondly because the court had absolutely no reason to allow the submission of phone footage which is and was entirely f***ing irrelevant to the case against Harry Maguire.

Still, at least he has been ‘cleared’.

I shouldn’t be surprised but how sad that @HarryMaguire93 ‘conviction’ led news bulletins & made front pages but his successful appeal barely gets a mention. Right now he’s officially ‘innocent’ in the eyes of Greek law. Let’s not forget that.

‘Cleared’ and now a ‘successful appeal’. What next? Compensation?

Yes, that’s LIVE news on a court case that ended on Tuesday and will not be heard again for another two to three years.

Just under the latest from Greek justice expert Wayne Rooney comes this update:

‘Harry Maguire’s fiancee Fern Hawkins insisted the truth will come out over the Mykonos brawl and that the Manchester United captain’s family have “lived through a horror film”.’

Since when was sharing a message of support from somebody who used to be on Love Island the equivalent of saying something yourself?

Since newspaper websites had to find LIVE content for a non-evolving story, perhaps?

Everyman
As we read about the ‘£29,000-a-week luxury villa in Mykonos with eight bedrooms and a private infinity pool’ where Harry Maguire was staying before his altercation and arrest, remember that he ‘simply wanted to walk public byways, being the grounded, engaging soul he has always been‘.

Was he? Carry on…

‘The Three Lions player with X-Factor, a guaranteed starter for club and country, while his good looks and huge talent made him one of the most marketable assets in the Premier League.’

This does not sound familiar, but handily we have England World Cup player ratings from 2018 written by one John Cross to consult:

‘Dele Alli 6: Scored against Sweden but Alli was not at his best – he did not look sharp or fully fit. At his best, he’s superb and did not hit that level.’

Still, don’t let that spoil your ‘where did it all go wrong?’ narrative.

Antique news
There is understandable desperation for Lionel Messi clicks but none as quite so desperate as the Mirror:

That will be Lionel Messi’s comments on Man Utd transfer from 2007. For f**k’s sake.

Translated headline of the day
‘Lionel Messi and his axed ally Luis Suarez leave a restaurant in Barcelona after a ‘last dinner as team-mates’ as wantaway star emerges for the first time since demanding to leave’ – MailOnline.

Translation: Man has tea with friend.

Ask the expert
If you think things have gone quiet on the Jadon Sancho front then you are a fool; his name appears 16 times on the football homepage of the Express.

And the story that brought all of the clicks to the yard is this one:

Has Jadon Sancho been quoted? No.

Have Borussia Dortmund been quoted? No.

Is this actually just the opinion of ‘transfer expert Ian McGarry’? Of course it is.

And we should always trust him because of course Timo Werner is set to make his Liverpool debut this weekend.

Keys in the (toilet) bowl

“Messi is class but needs class around him. That’s why he’s failed to cut it at international level.”

(According to a journalist in Brazil two days ago).